1. What's your worst habit relating to your knitting?

2. In what specific ways does your knitting make you a better person?

It calms me. I love feeling the yarn slip through my fingers and watching it become something more beautiful. On some level, it's nice to connect to our ancestors who knit out of necessity and produced some beautiful things.

3. How might you or your life be different if you were suddenly unable to knit?

Ack! I don't even want to think about it!

4. If money were no object, what one yarn, and what one tool or gadget would you run out and buy first?

A luxury yarn - cashmere, I think. I wouldn't want any specific tool or gadget for knitting but I've seen gorgeous, elaborately carved spinning wheels in magazines that I could love.

5. What knitting technique or project type are you most afraid of (if any)? What, specifically, do you fear will happen when you try it?

Entrelac. I think it looks fussy and would be easy to screw up.

Stephanie Pearl-McPhee aka Yarn Harlot. I love her sense of humor and her ability to make all kinds of knitting techniques seem logical and do-able.

7. Do you consider knitting, for you personally, a mostly social activity, or a mostly solitary activity?

Solitary. I'm an introvert at heart.

8. Is there a particular regional tradition in knitting that you feel strongly drawn toward (e.g., Fair Isle, Scandinavian, Celtic, Orenburg lace)? Any theories as to why it calls to you?

Aran/cable knitting. Not sure why it calls to me. I know that I had ancestors near the British/Scottish border so maybe some of them had links to Ireland as well.

9. If you were a yarn, which yarn would you be?

Chiengora which is a fancy name for dog hair.

(a) How many years have passed since you FIRST learned to knit?

Lots. I learned the basics from my mother and grandmother when I was a child. I didn't knit much then though. I taught myself to crochet and do cross-stitch and took classes to learn Hardanger and focused on these most of my adult life. My mom knit so beautifully that it was too easy to just start a knitting project then give it to her to finish.

(b) How many total years have you been actively, regularly knitting (i.e., they don't have to have been in a row)?

(c) how many people have you taught to knit?

Probably about a dozen students at school last year. I'll be starting another knitting club at school this year and some of the teachers and assistants have expressed interest in joining as well as students.

(d) Roughly what percentage of your FOs do you give away (to anyone besides yourself, i.e., including your immediate family)

A couple of times a week. Mostly while waiting for appointments.

12. If a genie granted you one hour to stitch-n-bitch with any one knitter, living or dead, who would you choose and why?

Stephanie aka Yarn Harlot for the same reasons as above. How much fun would that be?!

13. What aspect or task in knitting makes you most impatient?

Finishing projects. I love choosing patterns, yarn, setting things up, learning new things. Once it gets familiar, I get a bit bored. I guess that I'm a process knitter more than a product knitter.

14. What is it about knitting that never lets you get bored with it?

There's always something new to learn.

15. Describe how and where you most often do your knitting - where do you sit, what is going on around you, what tools do you use and how are they (dis)organized?

Mostly in the evenings and late at night in my living room in my recliner. I have the OTT light there and my needles and tools are beside me. The TV is there for company, my iPod is at hand if there's nothing I want to watch on TV, and the dogs are snoozing around my chair. When I'm not working I also like knitting in the sunroom in the afternoon if it's not too hot or too cold.

16. Which one person is the recipient of more of your knitting than any other?

None yet but it will be someone who will appreciate the amount of time and effort spent on it.

17. What's the oddest thing about your knitting, or yourself as a knitter?

I hold my right knitting needle like a pencil. I'm not sure there's a name for that.

18. What do you see yourself knitting - if anything - twenty years from now?

Not sure about twenty years from now. Someday I'd like to knit baby clothes for grandchildren. I've always loved baby clothes.

19. If you were stranded on a deserted island and could have only ONE SKEIN of yarn, which yarn would it be and what would you do with it?

Something very fine and luxurious that would take a long time to knit.

20. If you were allowed to own only one knitting-related book, which would it be? (you'd be free to browse others, but you couldn't keep them)

Knitting Rules! by Stephanie Pearl-McPhee. It's got lots of good information and it's entertaining.

For me it is. I knew that I needed to do something to de-stress and relax and couldn't see myself meditating so I started knitting. I've actually checked my blood pressure before and after knitting and it goes down significantly while I'm knitting.

EDIT: This last question added by Caroline:
22. What important thing are you trying to put off doing whenever you knit?


This questionnaire is from Kate A.'s blog, Å Strikke

Posted by Susan at 4:33 PM 2 comments: Links to this post 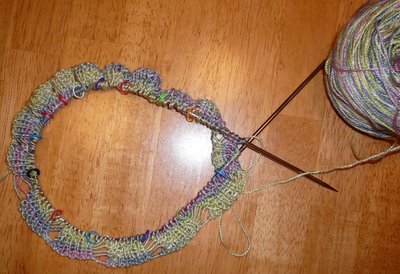 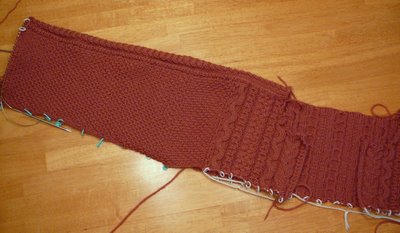 Update photos - I've started the Silk Smoke cowl after trying a lot of other patterns this week. Turns out that lace knitting really isn't my thing. I cast on for the Diamond Fantasy scarf several times and kept ripping it out because, as careful as I was, I kept losing stitches somehow. I double-checked my yarnovers and counted each section as I finished knitting it but by the next row I was missing stitches. Maybe Yarn Harlot's fates are doing a number on me. I finally gave up and cast on the Silk Smoke. It's pretty easy. I haven't lost any stitches yet. I should be able to finish it using one skein of the Sea Silk and will be able to return the other two. At the cost of it, this is no small matter.

I also did some more of the sleeve on the FLAK cardigan. I had pretty much abandoned it over the summer as it was too hot to knit with all that wool in my lap. I now understand why people in the knitalong kept referring to being lost on sleeve island. It's pretty repetitive and seems to take forever.

Well, I was back at work for two weeks and came down with a cold that turned into laryngitis then a bacterial throat infection. I haven't had a voice all week so have been at home. Sheesh! Those children will have bonded with the sub by now and forgotten all about me. Diabetes means never having a simple cold without complications. I have a lovely small class of grade twos this year.

I do have a couple of kid-bits. The first one was provided by my niece Katie. The day before her first day of grade one she took it upon herself to cut her hair. This may be have been prompted by my sister's comment that they really should have gone to the hairdresser over the summer for a trim, at least the bangs. I don't think that Katie will be cutting her own hair again any time soon. After an emergency trip to the hairdresser that afternoon Katie now has very short hair, especially her bangs. The hairdresser really couldn't perform miracles with those bangs unless she wove extensions in them. Katie plaintively asked if they could get her a wig for the first day of school. After a few double-takes from her friends on that first day of school, she seems resigned to the fact that she will have short hair for a while. Katie's teacher told her that she looked like Tinkerbell and that helped soothe her soul. School pictures will be taken soon and there will be a lasting memory of her haircut. Someday I'm sure it will be good for a chuckle. Actually, I already find it good for a chuckle but I don't think Katie does.

The other kid-bit is courtesy of a grade two student (in the other grade two classroom at my school) on the first day of school. After lunch, he went to the office for a late slip. The secretary, who is a good buddy to this boy, teased him about being late on the first day of school and asked him why. He replied that the pepperoni pizza took too long to cook. Turns out it was his birthday and he had been taken out for lunch. While writing the late slip, the secretary asked him who his teacher is this year. A look of total confusion came over his face. Now, to be fair, it was the first day of school and his teacher is new to the school and has a hyphenated last name, Mrs. ____________-Drumm. After hmming for a while, he finally had a brain-wave and said, "Oh yeah! Mrs. Drumstick!"

After a long, hot, dry summer, autumn is making itself felt here with cool, rainy weather. The pictures above had to be taken indoors as it is just too dark in the sun room today so the colors aren't very true.
Posted by Susan at 1:28 PM No comments: Links to this post