Merry Christmas everyone!
Posted by Susan at 6:41 PM No comments: Links to this post

I have told you before that I am an incurably nocturnal being. That meant that I did not have to set my alarm to see the lunar eclipse early this morning. I saw it before I went to bed! 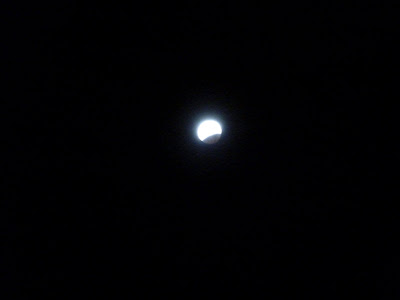 This picture was taken at about 3:30 a.m. as the eclipse was waning. So beautiful! It was cold outside and taking a picture was tricky because I didn't want to take off my gloves but I managed to get a good pic out of a lot of duds.

Most information out and about says that the last lunar eclipse that occurred at the same time as the winter solstice was in 1554. Apparently that's not entirely accurate. At any rate, it's a very rare event and we certainly won't see another one in our lifetime.

Posted by Susan at 8:54 PM 2 comments: Links to this post

Just a couple of pics to share with you today. 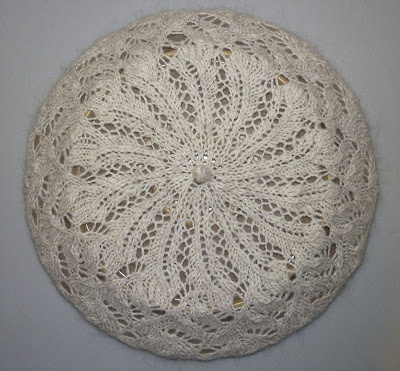 Anthera posing over a plate to show the design. I used my handspun Cormo/Sheltie/Targhee/Angelina yarn. 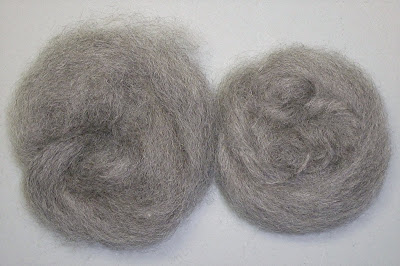 A couple of Gotland nests of combed top. I used my Valkyrie mini combs with one clamped to the table, Dutch comb style. They work better than the Majacraft combs for this longer stapled fiber.

for your weekend's entertainment 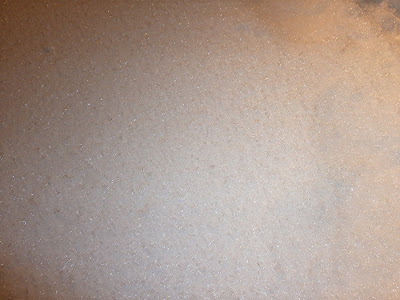 When I took the dogs out late last night, the ice storm had ended and there were strong winds blowing a skiff of snow over the ice crystals. The back yard glittered in the yard lamps. It was so pretty that I ran back into the house and grabbed the camera. 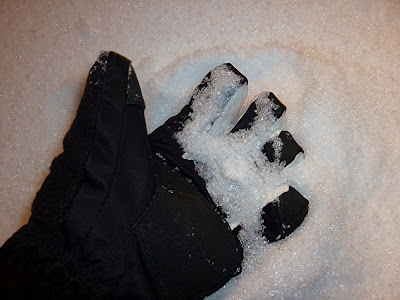 You really need to click and embiggen these pics to properly see how lovely these little crystals are.
Posted by Susan at 10:07 PM 4 comments: Links to this post

I have no excuse for my break from blogging. I don't know why but I've had blogger's block. It's not that I haven't been doing anything - I've actually had a lot of fun the last few weeks.
I've been taking Cooper to dog classes and we've been having fun getting a taste of obedience, agility, and flyball. Cooper's favorite is agility so I've signed us up for an agility class starting in January. This dog has a lot of potential with appropriate training. I figure fate sent him to me to get me off my duff. He needs to be kept busy. The challenge will be finding the balance between his needs and my aching body some days.

I've also been taking an intermediate spinning class and challenging myself to spin yarn that is outside of my comfort zone. Here are a couple of projects that I produced for the spinning class.

220 yards and 80 g of 2-ply cotton and silk noil. Spinning cotton is not my favorite thing to do so it was good that I forced myself to practice on this yarn. I have to admit that I am much better at it now. I dyed it with periwinkle acid dye and was surprised that it took the dye so well. I thought that only the slubs of silk would take it but there must have been more silk distributed over the entire yarn as I spun than I thought. You can see a bit of the wool yarn that I tied the skein with on the upper left side of the picture to see the difference between this blend and pure wool. 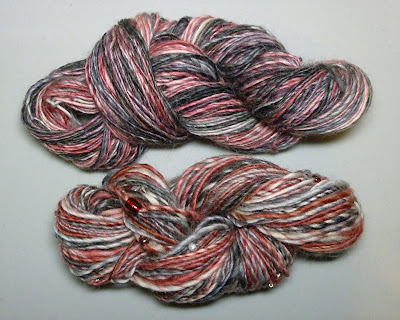 so far out of my comfort zone that it's scary.

It's Spunky Eclectic Tuxedo Rose Romney, the September club fiber. I wanted to see if I could anchor beads into a singles yarn. I pre-threaded the beads onto thin strips of the fiber and then spun the strips right into the singles. By incorporating twist into the fiber before and after each bead as well as beside it, it is quite secure. Lightly fulling the yarn after spinning helped too. I have 173 m and 114 g of the plain singles (top) and 88 m and 103 g of the beaded one (bottom - you can see the beads more clearly if you click on the picture). It was an interesting project to spin but I have absolutely no idea what I'm going to do with the finished yarn.

I got my Christmas present early. It's a Louet Victoria. 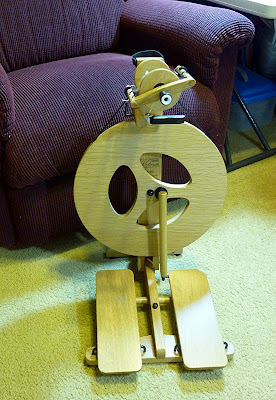 Shuttleworks has them on sale. It's a very light wheel and very easy to tote which my body appreciates. It treadles lightly using both feet or just one foot. So far I actually prefer to use it as a single treadle which surprises me because I usually find double treadling easier. Spinning my default fine worsted yarn is effortless. It's not a wheel for chunky or art yarns though but I certainly don't plan on churning out art yarns any time soon. The beaded one above was enough to hold me indefinitely.

The Victoria folds down and tucks neatly into its bag which can be carried by handles, a shoulder strap, or as a backpack. Louet planned this wheel very well. 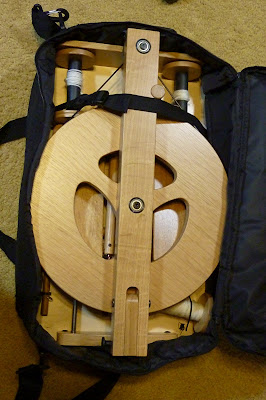 As I sit here typing I can hear ice pellets hitting the windows. We are having yet another winter storm with freezing rain which will turn into snow overnight. I'm sick and tired of winter already and it doesn't even officially start until next week.

I'm including the Environment Canada weather warning for your perusal. It seems that knowledge of punctuation and sentence structure isn't a job requirement for the person who writes these things.

Another hour or so of freezing rain.

A major storm system continues to affect much of Southern Saskatchewan this evening. At 10:20 PM radar indicates that the leading edge of the precipitation is just pushing into Melfort..And approaching Yorkton from the west. The precipitation generally is falling as a mix of freezing rain..Ice pellets..And snow..With the major area of freezing rain now affecting the Regina-Estevan area. Highway 1 has now been re-opened between Moose Jaw and Rush Lake. However in general most highways in the affected areas are reporting ice-covered, slippery conditions..With travel not recommended. The remaining areas under the freezing rain warning will likely see freezing precipitation continue for another hour or two..Before changing to snow or ending. As the precipitation tracks eastward tonight it will change to snow as it moves into colder air. Total snowfall amounts of 10 to 20 cm are forecast by noon Wednesday over portions of the eastern grainbelt.