I've been struggling with whether this is the best way to preserve memories for Berlyn in the future.  A good friend pointed out that technology was likely to change so much that by the time she is an adult, this blog format will probably be outdated and unavailable. I did try to back it up but blogger does that by using a programming code which was totally foreign to me even when I tried to open it with a decoding browser. Printing out a blog gets out of hand completely and isn't a good option.

I am also getting very nervous about the scope and implications of publishing anything personal on the internet. Not nervous for me because, really, who cares about the ramblings of a boring person yakking about knitting and spinning?  I'm nervous about putting too much out there about my granddaughter.  I might be way over-protective but I don't want to take any chances.  I know that I can make my blog private but that still doesn't solve the problems that are in the first paragraph of this post.

So, I guess it's goodbye. I met some lovely people here and I'm thankful for the blog heydays when the world seemed more innocent.

Posted by Susan at 8:44 PM No comments: Links to this post

I'm happy that I have a new source for little-kid bits, herein referred to as kidlet bits.  Berlyn, at three years old, is very verbal but still innocent and sweet, perfect for kidlet bits.

She loves to play hide-and-seek with Dan (Papa).  Usually he hides and I help Berlyn find him.  On this occasion though, she decided to hide for a change.  While Papa counted, I helped Berlyn hide in the bathtub behind the door.  When Papa called, "Ready or not, here I come!",  I heard a little voice call out, "I'm in the baftub."  Clearly, she hasn't quite got the whole hide-and-seek concept down pat.


Her mom shared a couple more kidlet bits.  Berlyn  has a fish in a bowl in her bedroom.  One day she was drinking a glass of water and asked Carmen is she was drinking fish juice.  On another occasion she asked her mom where unicorns live. 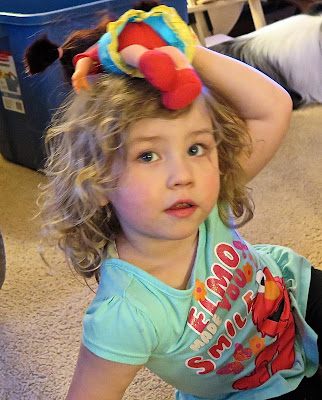 Posted by Susan at 11:46 PM No comments: Links to this post

It seems that I haven't gotten back into the writing routine but, to be fair, my spinning/knitting/everything else mojo also vanished for the last few months.  Part of the problem is an injury to my right elbow made doing a lot of things uncomfortable but mostly it has really affected my spinning comfort.  Normally I could also blame winter weather for stomping on my good, productive moods but that's a weak excuse this year with El Nino giving us one of the mildest winters on record.

Anywho, I'm back for now.  In case you think I've lost my grammar and spelling skills with the who references, I'm actually warming up to share this: 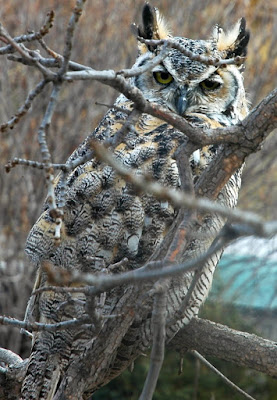 Isn't he lovely?  He sat in my next door neighbours' tree for most of a day a few weeks ago before leaving at dusk to do his hunting.  I tried to take some pics of him from my yard but learned that the neighbour snapped this keeper from his second story window which was really close to the house.  I'm using this picture with permission from the photographer, Ken.  I was very glad that Berlyn was visiting us the day of the owl visit but I think Nana and Papa were more impressed with the owl than she was.

You may have noticed the lack of snow on the branches of the tree in the picture.  That's because there wasn't any after a February-that-was-more-like-April, weather-wise.  I actually noticed tiny Swiss chard leaves growing in my garden from the dead plants that didn't get pulled in the fall!  In February!  There were several consecutive days of double-digit highs (in Celsius) and we were starting to get into the Spring groove.  Then March came along and reminded us that we still live in the Canadian prairies.  Although not terribly cold, it was dreary and damp most days.  Last week we had freezing rain and then a huge dump of snow.  It's been melting slowly.  My little green Swiss chard leaves have frozen but I did see some rosy rhubarb shoots just starting to push out of the ground today,  the earliest since I have been blogging.

Posted by Susan at 7:48 PM No comments: Links to this post