Frog it I did. Thank you Roxanne Richardson for suggesting that I do the math using my swatches and measurements to more accurately calculate the ratio for picking up stitches. I told my husband the math teacher that, if his students ever question why they are learning math and how they will ever really use it in the real world, he should tell them that they will need it if they ever want to design sweaters that fit!

My sock yarn (Sock It To Me) arrived yesterday from Elann. I can't wait to start swatching and see what cool patterns develop.

I have another kid-bit (as my cousin Terry describes them) to share. This one falls into the 'might as well give it a shot' category. I have two deaf students in my class, both in grade 3. One has had a cochlear implant (inside the head, very fascinating) and can hear me through a broadcast system that also sends my voice right inside his head. My mike is the same kind that the Secret Service wear when guarding the president. I sometimes have an overwhelming urge to mutter into my mike things like "Jelly Belly to Ugly Swan. Code Sister. I repeat, Code Sister..." but I digress. The other child has limited hearing but wears hearing aids to help him. Both boys know some sign language but the goal is to help stop them from relying on sign and to increase their receptive language and communication skills.

Kids being kids, these two boys have developed a special bond and will often sign to each other in a pigeon mix of sign language and their own invented signs. We have them seated across the room from each other in class as they get silly together and have a hard time staying on task. During a recent spelling dictation, my teaching partner noticed that one of the boys kept turning around and looking at the other. When she casually walked around so that she could see what he was doing, she saw that he was surreptitiously signing the letters of each word to his buddy. Hey, worth a shot, right? From a teacher's point-of-view, this is not something that was covered in those education classes at the University.

We have been studying Heritage in Social Studies for the last few weeks and have been discussing how the pioneers made their own clothes. I told the kids that if anyone wanted to learn to knit I would help them during afternoon recesses. I sent notes home on Tuesday asking their parents to provide a pair of 6mm needles and a skein of worsted weight yarn. I had two kids bring their supplies yesterday already so we started. By the end of the recess I was wondering what I had done to myself! The kids were all thumbs and it seemed like this was a serious mistake. However, I called them over to me when they were done their work at the end of the afternoon and sat with them for another few minutes and they both caught on and were knitting! I don't know who was more thrilled - me or them! They both excitedly took their knitting home to continue practicing. I suspect that the other interested kids (10 of them or so) watched this happen and will show up with their knitting supplies today. How I'm going to get that many of them started at once I have no idea. But we'll have fun anyway.

And, ending on a sad note, condolences to my sister and her family on the loss of their Bichon buddy Meemo in the wee hours of this morning. His health had been failing and he just couldn't go on any more so was helped to a more peaceful place to join his Bichon friends, my Murphy and Ceilidh. Rest well, dear old dogs.
Posted by Susan at 9:22 AM No comments: Links to this post

Do I need to visit the frog pond? 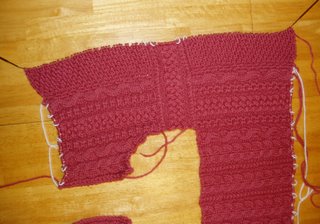 I have done about 2 inches of the sleeve and I'm a bit worried that I might have to frog it as it's flaring out too far. I picked up the conventional 3 stitches for every 4 rows. If I have to start again I will pick up one stitch in every other row. Oh well, better to find out now than after I've knit more of the sleeve. I'll set it aside for now and gladly accept opinions before I 'rip-it, rip-it'.
Posted by Susan at 7:38 PM No comments: Links to this post 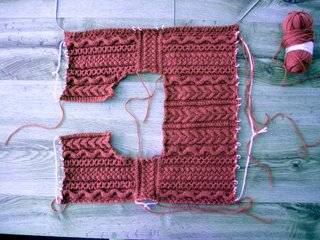 Wow, it's been a long time since I've posted here! We had spring break this past week and have been very busy trying to do all of the things that we haven't had time to do at other times like going to appointments and shopping. I think I need a holiday to rest from my holiday.

My aunt and uncle visited from Manitoba for Easter. It's always nice to have a visit with them. I hosted Easter dinner and had the family over here, even my 93 year old grandmother in her wheelchair. We had an absolutely beautiful day! It felt like summer (without all of the bugs). We were able to eat out in the sun room and the kids ran in and out all day without their shoes. We nicely got into summer mode and then, blam, winter hit again early in the week. We had a lot of rain and some slushy snow. Luckily it only lasted a couple of days.

I haven't done much knitting but I have read a lot of books about knitting! Janet Szabo's new book Aran Sweater Design is wonderful! I'm sure that I'll be referring to it a lot. I did manage to start the sleeve on the FLAK sweater (the top part of the photo above). I played around with the hue on this picture so that the wool looks more like its true color.

I discovered that it is very difficult to knit in my old Lazy Boy rocker that's in the sun room as it tips me too far back to be comfortable looking down at my hands. So of course that meant a shopping trip for a glider rocker to replace it. It's so soothing to glide back and forth while knitting. I'm telling myself that it must burn a lot of calories at the same time so that counts as a workout, right?

I also read Stephanie Pearl-McPhee's 'Yarn Harlot' and 'At Knit's End'. Absolutely hilarious!! For some reason, I've had an irresistable urge to go yarn shopping after reading these books. She rationalizes doing it so well. I never thought that I would knit socks but after reading these books I've ordered self-patterning sock yarn and an instruction/pattern book from Elann. Of course that meant that I had to order several sets of double pointed needles too. And if you have funky hand-knit socks you don't want to hide them in runners. I happened across a new pair of Birkenstocks that would show them off nicely so needed to buy those too. If I finish the socks they will be worth their weight in gold! Way to go, Yarn Harlot, you enabler you. Stephanie has a new book, 'Knitting Rules', but it's sold out everywhere I've looked. If you're a knitter and haven't yet discovered Yarn Harlot, go get these books now and check out her popular and entertaining blog.
Posted by Susan at 12:05 PM 2 comments: Links to this post 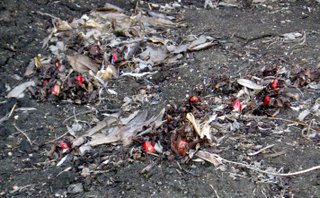 Here's how we know that Spring has really arrived in Saskatchewan - the ruby shoots of the hardy rhubarb. The ice in this part of the garden only melted a couple of days ago. You haven't lived until you've tasted the first bright stalks of rhubarb baked into crisps or loaves or muffins!
Posted by Susan at 5:40 PM No comments: Links to this post

It was such a lovely morning that I decided to take some pictures in the backyard... 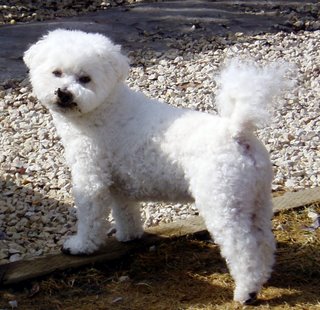 Pocus is maintaining his innocence about digging in the muddy spots but evidence to the contrary is on his nose and nails.

The shelties were romping as usual. I think this picture is hilarious. Look - Robbie's back feet aren't touching the ground. 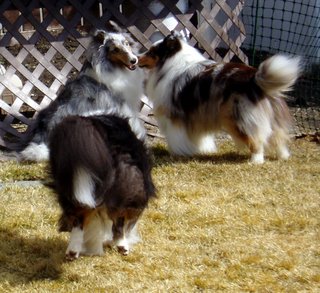 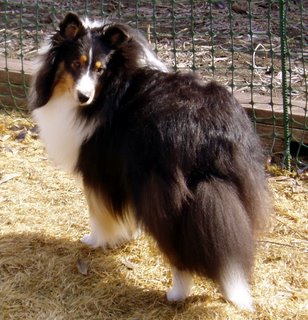 Robbie will be one year old on Sunday! 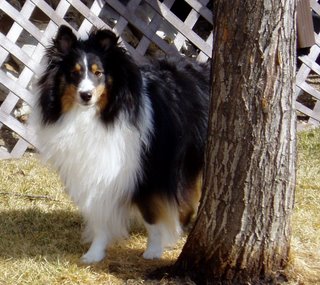 Posted by Susan at 7:49 PM No comments: Links to this post 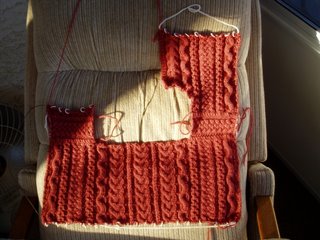 As you can see, I decided to make the FLAK sweater a cardigan after all. I thought I would be able to wear it more in the spring and fall as well as winter. I have finished the right front to the sleeve depth and have picked up stitches for the left front. I took the picture in the evening light (instead of in the morning light as I usually do). It looks much too red in this light.
Posted by Susan at 5:50 PM No comments: Links to this post