It seems that all I've had to blog about for the last few weeks has been the weather. Today, however, I have some fiber things to share.
I finally finished up the gift socks for my physiotherapist Rachel. I used yarn from the stash, Nova Sock Print color 303, doubled. I bought the yarn from Golden Willow Natural Fiber a while back and it's quite nice - I should have bought more at the time; the price was right. The socks are thick and warm. I hope she likes them and that they fit. 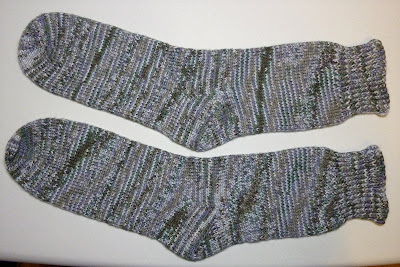 I also finished up the yarn for the shawl. I posted a picture of the first singles of merino, silk, baby alpaca, sheltie, and angelina that I carded and spun woolen in the summer. It took me quite a while to spin up the second singles of worsted silk brick; I don't like spinning silk by itself so it was slow going. However I do like the finished yarn.

The finished yarn on the bobbin: 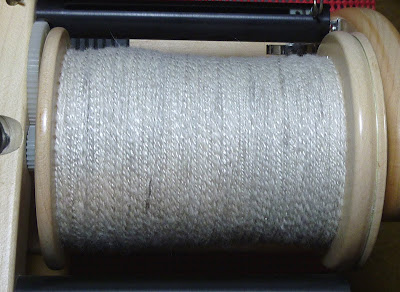 And after being fulled in the bath: 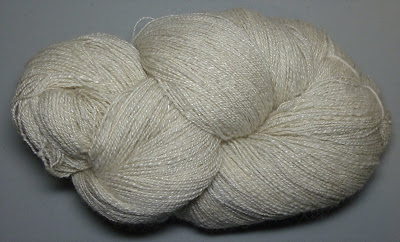 I haven't decided on a pattern yet but there are lots of contenders.
Posted by Susan at 5:09 PM 3 comments: Links to this post

It's been cold here. We seem to get a new dump of snow every 3 or 4 days. It's hard to believe that it's still November when I look outside. 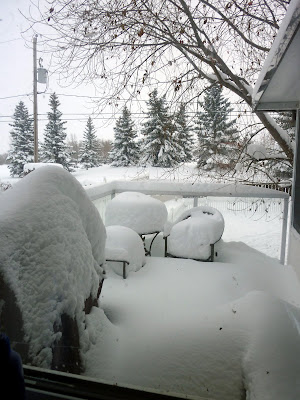 I think we've had just about as much snow already this year as we get all winter in other years but that might be stretching it a bit.

Although the shelties still like the snow, even they start lifting up their chilly paws soon. 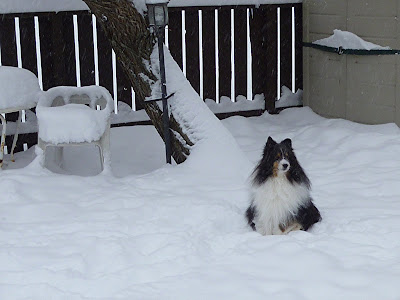 I took a couple of pics of Austin and Robbie before they got too cold this afternoon. I had to use my gloved fingers to snap the pics. 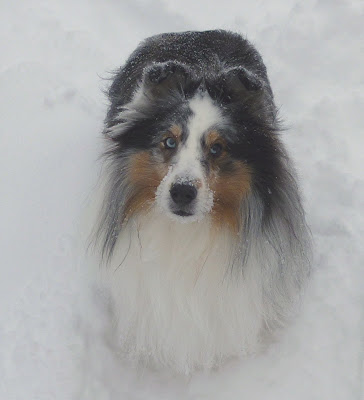 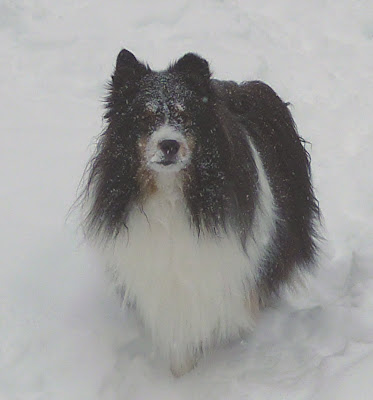 B and Cooper weren't as co-operative about the picture taking today. Poor little B almost has to swim through the snow drifts and comes into the house covered with snow. I don't think Cooper slows down long enough to get cold.

Dan got bronchitis which developed into pneumonia even though he was on antibiotics already. He missed a couple of weeks of school. His lungs can't tolerate the cold so we have really appreciated that Geoff has been clearing the driveway and sidewalks. Geoff will be moving out at the first of December. Dan and I will become empty-nesters for the first time. I told Geoff that he wasn't allowed to move out until the snow stopped falling. I don't think he is going to listen to me.

I've been taking a spinning class at Golden Willow and loving it as usual. Cooper and I started a dog class introducing obedience, agility, and flyball. He thinks it's great fun, especially the agility part.

I had a request to make a little video for Ravelry showing how the Hansen MiniSpinner can be used as a bobbin winder/quill with my trick of using a chop stick and an orifice reducer. It was my first attempt at recording myself using my laptop so the production quality is less than stellar to say the least. I learned a lot in the process though. Some of my spinning class friends asked that I post it here too so here it is for anyone who is interested.

Posted by Susan at 8:45 PM 3 comments: Links to this post

This snow storm wasn't nearly as bad as the one we had a couple of weeks ago. No snow bomb this time. We had about 18 cm (just over 7 inches) of snow as of yesterday. Again, the shelties are happy. The forecast is for cooler temperatures so I'm afraid this snow might be here for the duration of the winter.

I'm still not ready for winter but I don't think I ever will be. However it seems like a non-issue compared to what so many people have endured and continue to endure during wars. I am very fortunate that my life is so peaceful that only worry about the weather. I am forever indebted to the many who have fought for that peace.
Posted by Susan at 7:27 PM 1 comment: Links to this post 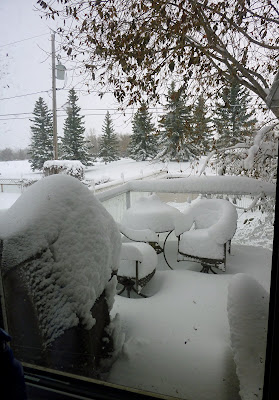 are true, is this true too?

Purple sky out there,
Much snow in the air.
Posted by Susan at 5:05 PM 4 comments: Links to this post

After a few days of record-breaking warmth, we had showers today and we are getting some snow this evening. Right around sunset I called the dogs in from the back yard and noticed that everything was purple.

These two photos are exactly as the camera took them with no editing or retouching. 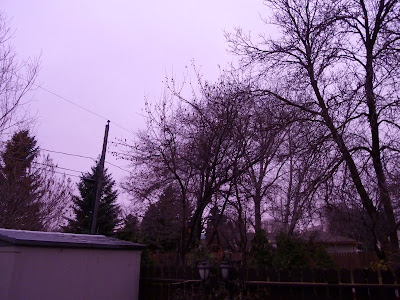 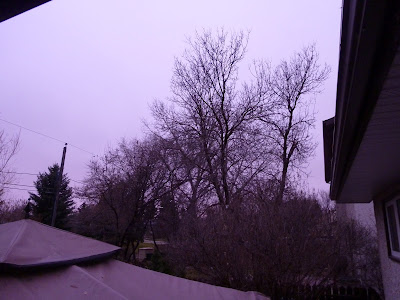 I don't remember ever seeing the sky that color before. It started snowing soon after so the heavy, cool clouds must have affected the colors in the sunset. Nature never ceases to amaze me.

Posted by Susan at 9:42 PM 3 comments: Links to this post

What a difference a few days can make! 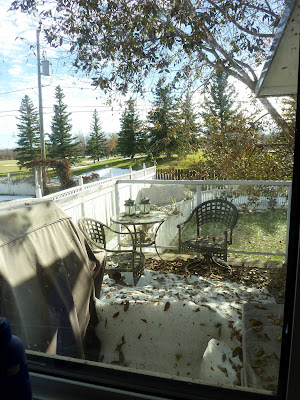 It feels like spring. Most of last week's snow, except for where it drifted or got shoveled into heaps, is already gone. I'm so glad. I wasn't ready for winter just yet.