My go to sock is a top down sock.  I can knit it without paying particular attention.  It fits my foot well.  I can use the old Sock Wizard software that we still have on the aging desktop PC.

Sometimes, though, I feel the need to experiment, to give my brain a chance to make new synapses.  Although I've done toe up socks in various ways, I've never been totally happy with the way they fit my feet.  I have very narrow heels.  When they measure my feet in shoe stores they always tell my foot is a narrow AA and my heel is an even narrower AAAA.

The sock that fits my heel the worst is this one.  Pretty yarn but there is way too much room in the heel.  Short row heels are a bad fit too.  I have decided that a flap and gusset heel is best because it draws the yarn in nice and snugly.

I knit this sock with the Sock Wizard program for a toe up sock. 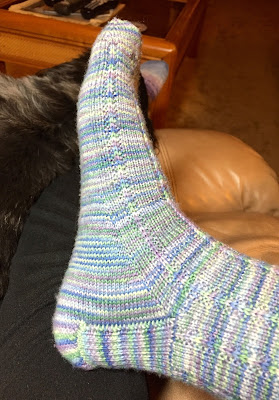 The heel turn seems to take many more rows than the top down patterns so that it curves over the heel and pushes the flap higher on the back of the heel.  There's a little pooch of knitted fabric just under the heel flap which looks sloppy on my heel.

I wasn't sure if the Sock Wizard pattern was a typical example of a toe up heel turn and flap so I decided to knit another toe up flap pattern.  I looked at a lot of patterns and decided that David's Toe Up Sock Cookbook looked like a good one.  I also did the calculations for the Queen Kahuna Crazy Toes and Heels book (which doesn't seem to be available any more) to compare to the numbers that came out in the Sock Cookbook calculations and the ones that the Sock Wizard program did based on my measurements.  Here's the result: 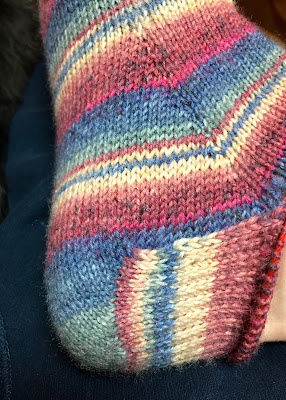 Hmmm.  Almost the same.  I did both with German short rows rather than traditional wrap and turn methods but  I'm not sure how it would change the shape of the heel turn.  There is still too much fabric for my skinny heel. 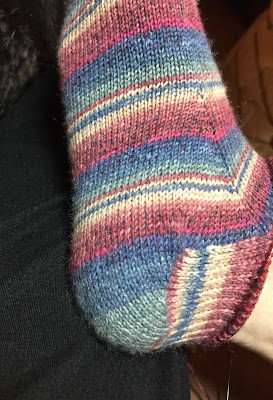 Here is a sock that does fit well.  The top down heel flap fits great.  I don't count rows for the heel flap but just knit it until it's square and it fits every time. 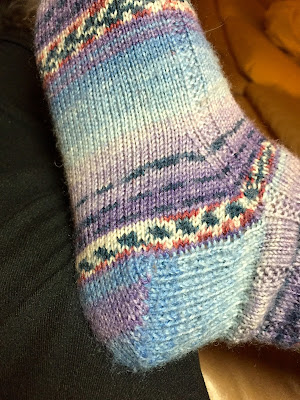 Now I have to decide if the heel fit on the toe up socks is something I can live with or if I will frog what I've knit and try again with my tried and true top down pattern.

What would you do?

Posted by Susan at 1:21 AM No comments: Links to this post

It's a rare year when we don't have snow on the ground in mid-November.  October was mild most days and downright balmy a few of them.  We went to a wedding in Saskatoon on Thanksgiving weekend. 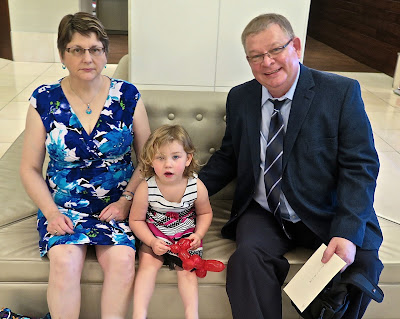 (That's as dressed up as you will ever see Dan and I.  I had to buy makeup just for the wedding as I never wear it otherwise.  Berlyn and I had a great time on the dance floor later in the evening but I didn't get a picture of that, unfortunately.   I was too busy dancing!)

Patrick, the son of our closest friends Allen and Rhonda, married his lovely Michelle.  Patrick and his brother Ross spent so much time with us while they were growing up that we consider them faux sons so it was a very special wedding. 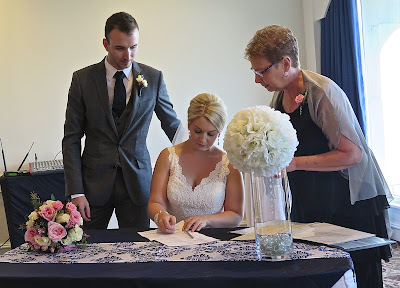 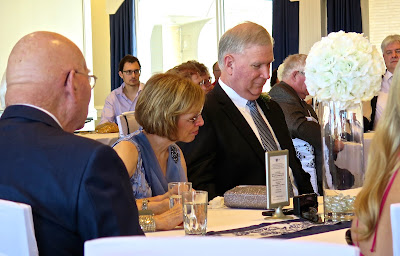 The groom's proud mom and dad.

They couldn't have had a nicer day for a wedding if they'd special ordered it.  Between the ceremony and the reception Dan and I walked downtown and saw a reader board that said it was 28C (82F)!  Mother Nature smacked us with cold rain and intense wind the very next day just to remind us that it wasn't summer any more.

However, the weather warmed up again and the kids had a lovely Hallowe'en evening for trick or treating.  We have had some light flurries that didn't last but no major snow events yet this year.  There has been talk about El Nino giving us a mild winter but we'll see about that.  Mild is relative at best.

We have two willow trees in the back yard that love to hang onto their leaves as long as possible.  Most of the time they lose their last leaves into deep snow banks where they stay until after the thaw in the spring.  This year one of them is already mostly naked and the other's leaves are fluttering down a bit more every day.  Dan is happy that he is able to clean them up before the snow flies this year.  I took the opportunity to take some photos in the back yard last weekend while he was taking a break as I snapped pictures of the dogs. 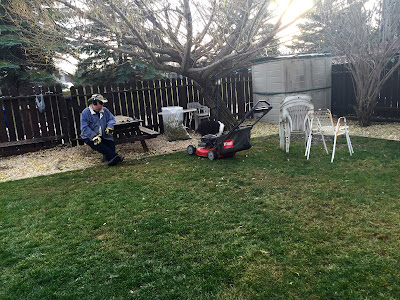 Notice that the grass is still green!

The cast of critters around here hadn't changed. 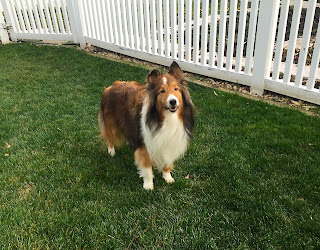 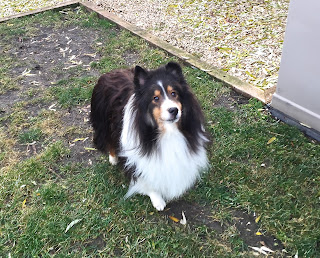 Cooper and Robbie took the time to pose for me but Austin and Bentley were too busy digging for mushrooms in the tree roots. 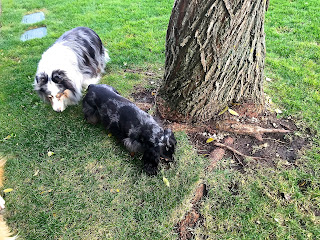 Those mushrooms cause upset tummies if they eat too many so I have to limit their time outside.  Covering the mushrooms is at least one reason in snow's favour but it's the only one I can think of at this point.  We'll enjoy the lack of snow for as long as we can.


Posted by Susan at 5:45 PM No comments: Links to this post

My neighbour took her two granddaughters, ages three and four, to see The Wiggles in concert a couple of weeks ago.  During intermission, she was sitting in the stall of the busy public washroom with both kids in tow.

The three year old decided that three's a crowd in the bathroom and said, "She needs privacy.  Give her some privacy!" and then unlatched the door which swung wide open.  Grandma couldn't do much about it and the kids didn't know how to latch the door so there was a large audience of onlookers waiting for a free stall until one woman calmly walked over and closed the door for her.

Toddlers.  Got to love them!

Posted by Susan at 11:24 PM No comments: Links to this post