I have been spinning for the Tour de Fleece. I have spun every day - some days a lot and other days a little. Here are some of the spinning projects from the first week. 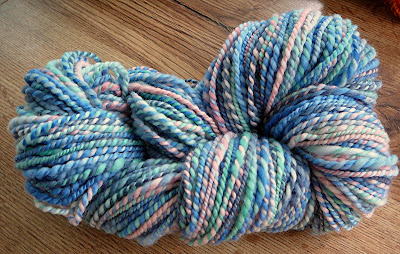 SW Merino, Scenic colorway, from beemiceelf on Etsy. I split the fiber in half lengthwise and spun one half as it presented itself. I split the other half into thin strips and spun them for the second single. Plied together, one single has long color repeats and the other has very short color repeats. It was the first time I've tried using the fractal stripes prep for fiber. I don't think the striping patterns are very evident until the yarn is knit up. I'm planning to knit an EZ Baby Surprise sweater with it. 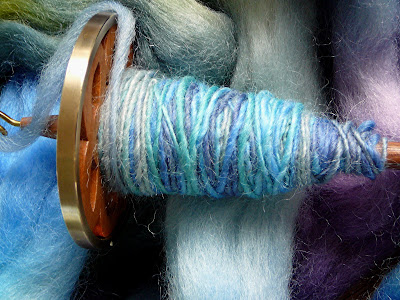 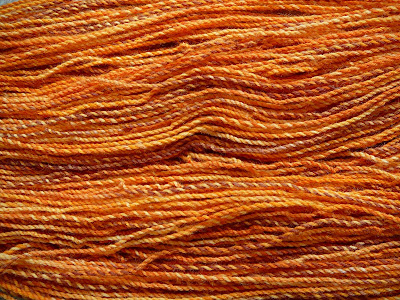 And my Bosworth Moosie arrived in the mail! I've been on a waiting list for it. The spindle is made from shed moose antlers. 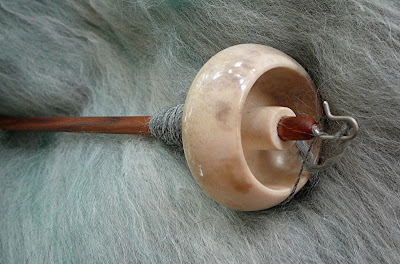 I raided my stash and found the perfect fiber for the Moosie's first spinning assignment. It's an Abby's Batt in the First Frost colorway - merino, baby alpaca, silk, and firestar - and it's the most beautiful batt I've ever seen! I bought it from someone destashing on Ravelry a while back. It's demanding to be spun laceweight. 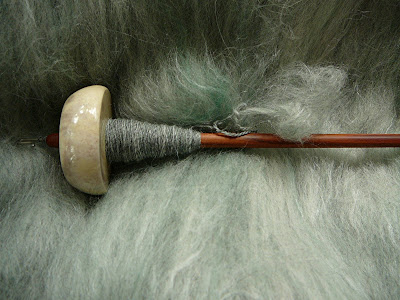 Great spinning projects! Golding spindles are so gorgeous. I can't wait to do a little spinning tomorrow now that my back is feeling better. I've really missed it these last few days. :) I've become quite addicted to spinning. I'm so glad I gave spinning another try.

Love the orange and the new spindle is beautiful!

Wow you have some pretty spindles. One of the girls at the Spin-In yesterday had a little wee Golding spindle.