so much for accountability

Remember these New Year's Resolutions that I made? I was aiming for more exercise and reduced internet spending.
I'm here today to tell that you that I have totally fallen off the resolution wagon and have been for quite a while. It actually all fell apart when I got pneumonia in February. I quit using the Wii Fit for obvious reasons (i.e. a total inability to sit upright, never mind exercising) and I haven't stepped on it since. It was also about that time that I started shopping on the internet too, probably because I was unable to move and was bored while I was recuperating.

I have had moments of guilt about it, especially the exercising stuff, but they are fleeting moments and easily ignored. So much for stick-to-it-iveness. Then I put things into perspective the other day when I overheard Dan talking to his Nintendo DS. He got it for Christmas too and is trying to keep his brain young with Brain Age. Anyway, he muttered in frustration, "I don't want to draw pictures!" at the machine twice in the last few days (that I overheard, so it may well be more times that I didn't).

Now I've developed a theory: we like advancing ourselves in areas that we feel competent. For Dan, it's sports and activity, math games, etc. For me, it's all about fine-motor skills and creative pursuits like spinning and knitting, and word games and writing. I am not good at gross-motor activities so I hate them, and that includes any form of physical exercise. Dan never was much for art or, for that matter, handwriting. He happily goes off to hockey and comes home stiff and tired, with bruises. But he doesn't want to draw pictures on the DS because he doesn't like drawing pictures. He has always excelled at sports and put a ball, bat, or hockey stick in his hands and he's a happy camper. If anyone puts a ball, bat, or hockey stick in my hands, I'll be looking for the nearest exit before I get hurt. But stick knitting needles, fiber, a spindle, or any other tool requiring fine-motor skills, in my hands and I can use them to produce beautiful
results. (That sounds self-serving but I think it's true.) In the same vein of this argument, Dan watches reality TV shows and I can tell that he would relish the opportunity to test his metal against the elements and other insane members of these contests. Me, I wouldn't last 5 minutes before I would be reduced to begging to get voted off the island (or whatever) so I could get a hotel bed and shower, not to mention food of my choice. I will never willingly eat bugs or raw fish and I don't care how much money is on the line.

So I'm using this theory to rationalize why I'm not exercising and why I'm okay with that. It's my story and I'm sticking to it. Yes, I may be weak and pathetic but I can rationalize my way out of a cardboard box if necessary.

In other news, both Austin and Bentley are recovering nicely from the neuter surgery. Our weather finally shaped up and I think it is now safe to declare that we have Spring. I've been going to a spinning class at Golden Willow on Wednesday nights and having a blast. 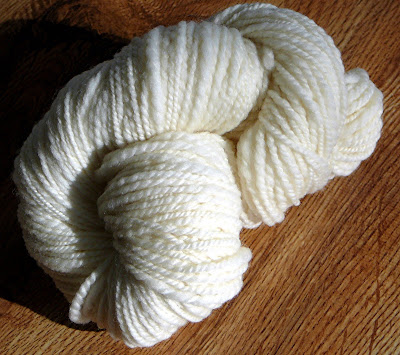 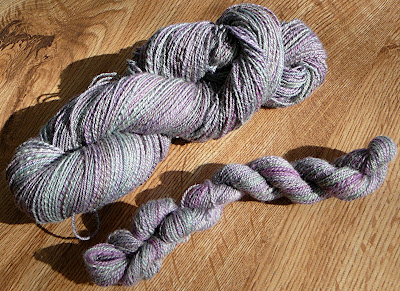 3-ply BFL and the little skein is leftover singles spun 2-ply, spun with BFL from Zebisis in the Moonflower colorway, 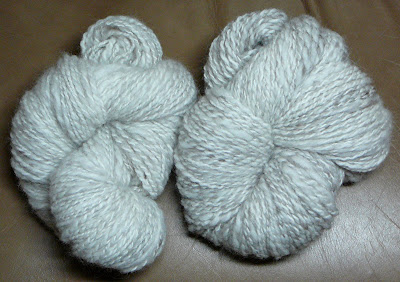 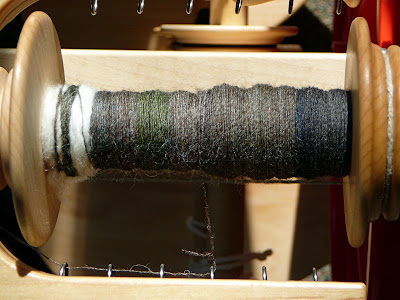 and the start of singles for socks using Spunky Eclectic Fiber Club April shipment of brown BFL as the base fiber. The colorway is Myrtle. (One of my internet purchases, for which I have no guilt - see above.)

One last note: after spending quite a bit of time plying these skeins on the Elizabeth, I was hurting. So I had a stern talk with myself and convinced me to put her up for sale again. See this info if you're interested. The asking price is not carved in stone so I'm sure we can work something out if you want this great wheel package. I am also willing to take it apart to ship it if necessary.

Maybe we could get back on the resolution bandwagon together. Ack.

what lovely yarn you spin!

I'm SO totally with you on the justifications! Furthermore (in support) I believe that those who are disinclined to exercise vigorously are disinclined due to genetics - nature's little way of pointing you in the right direction health-wise. If it's not in your genes to do it, you'd better not! Terrible things will happen! LOL!
BTW I really love the BFL. Such moody colors! Awesome!