I haven't been spending a lot of time on the computer because it hurts to sit down. Actually it hurts to stand up too but not as much as sitting down. I have had severe pain in my hip and wasn't going to even discuss it here but I'm past the point where I care if I come off whiny.
The thing is, I didn't do anything to hurt it, at least not that I remember. I had some pain deep in the hip joint (probably fibro pain) that I tried to work out by moving it. I think that's what did me in. I just came back from massage therapy and the chiropractor. They told me what the muscle was called that is causing me most of the grief but I can't remember the name of it. Whatever its name, it's affecting the sciatic nerve too, which explains the pain shooting down my leg. Therapy was likely a good thing but, right now, it just hurts like h***. I have adjusted my laptop cart so that I can stand at it to post this. Sitting down at this moment is not an option. I haven't found a drug option that will dull the pain either.
I think the worst part of this is that I can't sit comfortably. Therefore, I'm not comfortable doing the things that keep me sane, like knitting. So I spent some time making funky batts for this week's spinning class at Golden Willow. Normally I don't have much use for funky yarns so I haven't learned how to spin them. The class is a good excuse to step outside my comfort zone.
Here's the funky batt that I'll be taking to class. 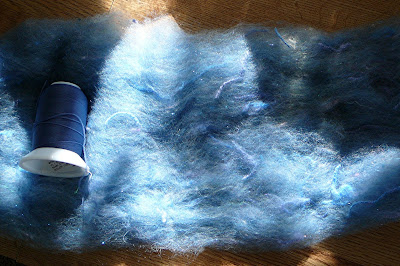 Don't ask me what fibers are in it because I lost track as I threw in bits and dregs of fiber, cut up yarns, and angelina. The spool of woolly nylon will be the binder yarn.

Although knitting has been put on hold for now, here's the start of a sock that I was knitting from yarn that I spun in fractal stripes. I used a BeeMiceElf SW Merino top in the 'Scenic' colorway. I split the top lengthwise and spun one single as it presented, giving me long lengths of the repeating color pattern. I stripped the other single many times so that the colors repeated much more quickly. When knit up, it gives subdued stripes that remind me of pointillism art. 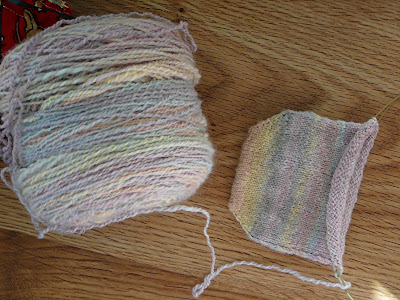 And finally, our extended summer weather ended abruptly on the weekend. So much so that I was worried that we might get frost last night. I sent Dan out to pick off the tomatoes just in case. 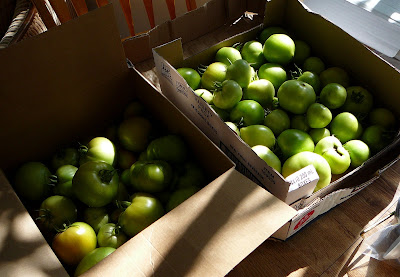 So sorry to hear about your painful hip. I truly hope it gets better and soon!
I noticed the older I get, the more aches and pains I get (ugh and I'm still only in my forties).

I can completely sympathize with you on hip pain. I have it and the pain moves into my lower back making me miserable rather I sit or stand.

Our summer seems to be gone now too. It was 84F yesterday and now we'll be lucky if we see 50F and they're calling for 3-6 inches of snow in elevations higher then 5,000 feet. I think winter is on its way.

Is that the beginnings of a sock? I love the color combos.