Football fever has struck Saskatchewan even more than usual. As my sister Darcie blogged, most people around here are football fanatics. The Saskatchewan Roughriders have the most devoted fans in the CFL even when they lose but, when they win, there is little else on most people's minds. And they are winning. They won a game here tonight to clinch first place in the division and Regina will host the Western Final game in two weeks. The winner of that game goes to the Grey Cup, the Canadian version of the Super Bowl.
I am one of the lonely few people in this part of the world who could care less about football but I hear all about it as Dan watches it fervently. I can tell how the game is progressing even if I'm not in the same room as the TV by how loud Dan is yelling at it (btw, louder is not better - the worse things are going, the louder he yells). It confuses the dogs. They're not sure who is in trouble but look to me for assurance that it's not them. I keep telling Dan that the coaches can't hear him from the living room but it doesn't make any difference. He gets totally into sports to the point that he has been biting his nails to the quick during the games lately. Me? - not born with the competitive gene, which makes me a bit of a freak on days like this. 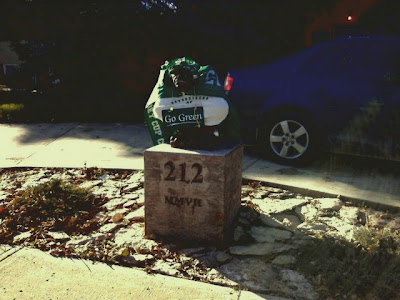