again with the shoe theme

This is Cooper's favorite napping spot, at the back door near or on the boots.

And check out what his pillow is: 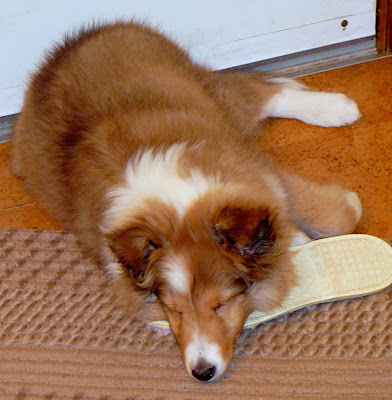 He has been sleeping a lot more in the last couple of days. For one thing, Bentley has decided that he is great fun and the two of them have been romping together during most waking hours so Cooper is tired. For another thing, he needs to rest up because he's growing like a weed. He gained two pounds since last week and is getting very leggy. All of a sudden he looks like a little sheltie, not a baby anymore.

I wish I could show you pictures of the two little dogs wrestling and chasing each other but I am having camera problems. My camera's flash timing is off. I need to take about ten pictures before I get one that isn't over- or under-exposed. Without the flash the moving dogs are a blur and, by the time I get a flash picture, they've moved on. The flash hasn't been working properly for quite a while but it wasn't a big problem before the puppy arrived because I usually try to take pics in natural or OTT lamp lighting. That's not an option to capture puppy antics on these cold days. I need to save up for a new camera and would appreciate recommendations for one that is point-and-shoot with very good stability control (I shake like mad when my blood sugar is wonky).
Posted by Susan at 6:46 PM

How old is Cooper again? Slippers seem to be very comfortable for sleeping puppies! :o)
I told my son to do research and buy me a better camera. He did, ordered it online and it never came. We've got our money back, they are still looking for the package, and I'm still in need of a new camera. :o(
Can't remember what he came up with, but he said it was a very good deal. :o(

Thye sure grow up fast don't they!