I had a box of hot house tomatoes on my counter so I decided to make a favorite pasta dish for supper the other day. Imagine my surprise when I cut into one of them and saw what looked like little worms. 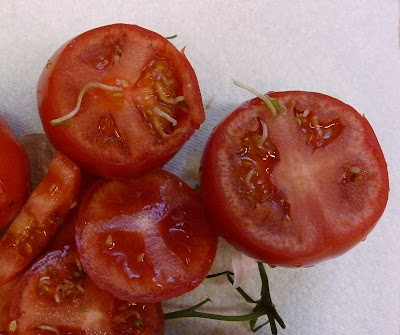 On closer inspection I realized that some seeds had sprouted INSIDE THE TOMATO! 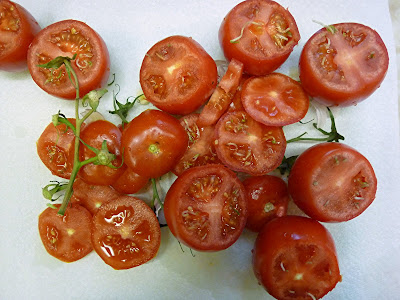 I have been eating tomatoes for most of my almost 52 years and have grown them every year of my adult life and I have never seen anything like this.

I did a google search and found out:

-they are extremely rare (you think?)

-normally, tomato seeds have a gelatinous coating that prevents them from sprouting until decay and fermentation destroy the coating (as would happen in nature)

-depending on the source of the internet posting, these strange sprouts are either found in on-the-vine tomatoes that have been in cold storage for a very long time or result from horrible scientific methods that have genetically modified the tomatoes to make them evil and toxic.

Whatever the cause, I didn't feel right about these Franken-tomatoes and refuse to buy any more that are from the same hot-house.


I have been reading Anti-Cancer by David Servan-Schreiber. Two friends have been undergoing treatment for cancer and both are very impressed with the book so I bought a copy to read it for myself. It is a very compelling book, not only if you are concerned about cancer but also if you think that we can be doing more for our natural resistance to disease of any kind by choosing a healthier diet and lifestyle. It certainly pertains to my issues of diabetes and high lipids and could very well help my chronic pain problems to some degree.

The Franken-tomatoes incident pushed me over the edge about shopping for more organic foods. I keep my garden as organic as possible but haven't worried about how supermarket produce is grown. I won't become fanatic about choosing organically grown food but I will definitely be exploring my buying options more.
Posted by Susan at 3:21 PM

wow, those really do look like a science experiment! Kinda gross. I have decided to eat healthier too... well I have been thinking about it for a while but starting tomorrow Jeremy and I are actually doing it. We bought our groceries today and I don't think we had ever gone down the produce isle before lol (kinda joking) I have yet to plant my garden but I am looking forward to eating fresh fruits and vegetables when they grow!

I have seen that lots of times in tomatoes. Maybe I am going to have to change where I buy my groceries??

I've seen that before, and I've certainly not eaten the tomatoes either. I spotted something odd - dark bumps on the skin - before slicing them. After opening it up, I realized that it was the green leaves of the sprout trying to push out through the skin. Amazingly revolting, and repulsive enough to put me off of tomatoes for a good while!

My son's father has had severe hayfever type of allergies his entire life and for the past couple of years he has been eating a strict diet of no sugar or white flour and no meat. His allergies have dissappeared! I wouldn't have eaten those tomatoes either Susan.

I wouldn't have eaten them either, and hmmm... it does make a good case for organic.

I have never seen anything like that! weird! I am a dog lover too and an artist.... Did you know about dogbook? here is one my dogs pages..http://apps.facebook.com/dogbook/profile/view/7424702

Those tomatoes look gross! Not even knowing what it is, helps.

Woah - a good remedy is heirloom tomatoes from your own garden (or patio pots)!

Sorry to hear you were under the weather on Saturday. Poor Darcie and Katie were as drenched as anyone.

I have never seen any tomatoes like that (and I hope I won'T). Creepy! Yet you took the time to research the phenomenon. You are brave. I am afraid those tomatoes would have been disposed of before it even occured to me to get my bifocals and check it out.

I had the same issue last night as I was making grilled cheese sandwiches. Cut open the tomato and was immediately repulsed by what I thought were worms, then I realized, they were sprouts!! Needles to say, I couldn't use/eat them and out the door they went! BUt never in my 42 years on this planet have I ever seen that before.