At the beginning of July I decided that it was silly to keep a wheel that made my knees hurt. So my beloved Majacraft Rose was sold to fund the purchase of a Hansen miniSpinner. The spinner finally arrived yesterday! 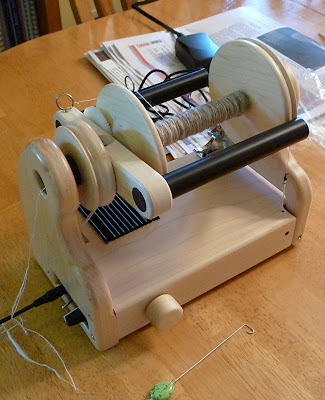 It's amazing! Small, light, whisper quiet; it's an espinner that can easily spin the fine yarns that I like because of its Scotch tension. Here are a couple of sample yarns that I spun as soon as I took the spinner out of the box. On the top is cotton and below it is silk. The orifice hook is included with the spinner. 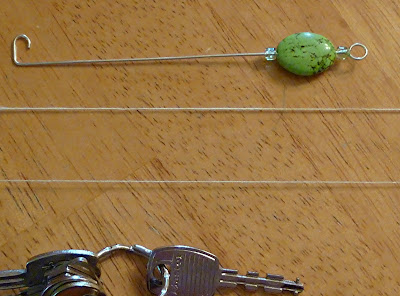 It has a tap on/off control and the WooLee Winder bobbins are huge. It can be plugged into the regular power outlet in the house, a 12 volt outlet like a cigarette lighter, or a power pack. I had already bought an Oh Canada Zuca bag and a little power pack from Canadian Tire for it so I was ready to go. It sits nicely on the Zuca bag for spinning and pops inside for transport. 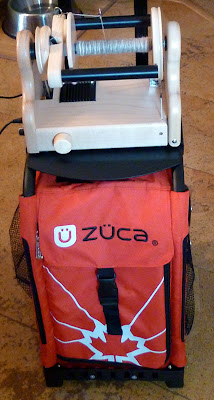 The Zuca bag has lots of pockets and compartments for fiber and accessories. It's easy to pull along because the handle easily pops up and it has double skateboard wheels in the rear.

I didn't have much time to play with my new toy because I had an appointment and some errands to run so didn't get a chance to get back to it until after supper. I plugged it in beside my chair in the living room and set the spinner on the Zuca bag so it would be ready to go. As I happened to glance down before sitting down and saw the power cord in a brown puppy's mouth. He had already severed it in half in the blink of an eye. If there had been an interested party available, I'd had given that trouble dog away on the spot! Dan managed to splice it to get it working again and found a new one today when he was out and about. So I guess I'll keep Cooper after all (although I fished a rock out of his mouth again today, aargh!).
Posted by Susan at 12:31 PM

Cooper sounds like a dangerous pup to have around.....I hope for his own safety that he stops those bad habits! That's a cool looking spinner Susan. I bet you could spin alot longer on one of those because your body could relax.

Cooper!!! I suppose that trumps Gretchen's first (and only?) destruction... Yesterday, I caught her with the removable divider from my Namaste Buddy case... the pink one. Sigh. I do remove them, but... oh well...

Thank goodness nothing really drastic happened to Cooper or your new spinner, Susan.