the little tea towel that could

My latest weaving project was a learning experience to say the least.
I was aiming for a baby throw and I wanted to plan the warp and weft to get a gingham effect. I used stash yarn, TLC Cotton Plus(discontinued) in Spruce and White and got this: 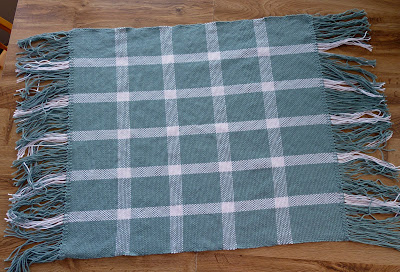 much more resembling a tea towel than a baby throw.

I debated crocheting an edging all around it but it just didn't feel right. This went into time-out for a while because I was disgusted with it.

Once I thought more about it, I pulled it back out and twisted the fringe then cut it very short so it wouldn't get caught in baby fingers. Then I decided to cross stitch something onto it. That turned out to be a bigger project than I thought.

I surfed the web for some suitable cross stitch patterns for a baby garment. Then I realized that my woven squares aren't square at all - they're rectangles. So I found knitter's graph paper and turned it on its side so the "squares" were taller than wide. I then had to trace my pattern outline onto the graph paper or it would have been distorted, and flip the pattern for a symmetrical match.

My first pattern of spindling sheep ended up not looking like sheep at all so it was back to the drawing board. Ducks worked much better. I tried using leftover perle cotton from my Hardanger days for the cross stitching but it didn't pop on this fabric. Splitting the TLC Cotton Plus yarn in half (two of four plies) worked much better. 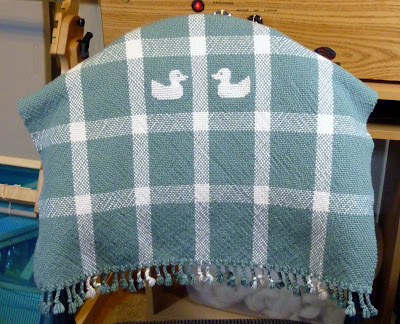 much better; not what I had in mind but less like a tea towel for sure.

I've tucked this away and will pull it out when a baby gift is needed. I made a trip to Michaels and bought baby yarn to try another throw. There will be more texture in the next try. I'll keep you posted.
Posted by Susan at 8:13 PM

I love it too! You did the best possible thing with it. The duckies are perfect!

Both pictures look fantastic to me! The duckies do give it that something extra Susan...you should be very pleased :-)

How clever. Looks good. Own it! you should be proud.