Dan and I hopped on a bus to go downtown. 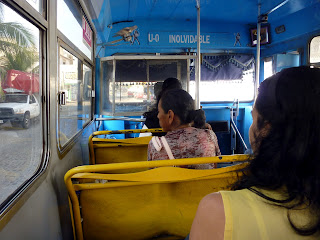 Buses are inexpensive and there are lots of them so it's easy to go just about anywhere in Puerto Vallarta.  Most of the locals use the buses for everyday transportation.
The bus drivers take your fare and make change while pulling away and driving so you need to hang on.  No time is wasted.  Traffic is goofy in PV.  There don't seem to be too many traffic rules and the aggressive drivers demand right-of-way.  It seems as if driving is akin to playing chicken to see who backs down first.  In spite of that we didn't see any accidents.  It was fun to watch but I was glad that I wasn't driving on the congested narrow downtown streets.
When we first got on the bus it was full so we grabbed a post and stood but a man popped up and indicated that I should take his seat almost immediately.  The Mexican people are unfailingly polite and respectful.
We rode as far the the Malecon, the oceanside boardwalk where vehicles aren't permitted. 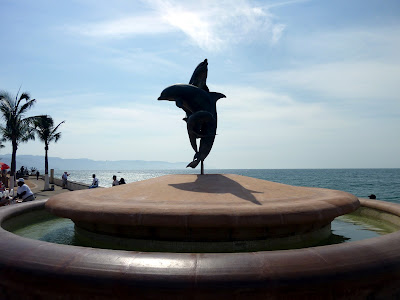 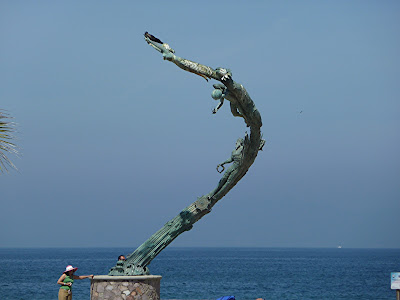 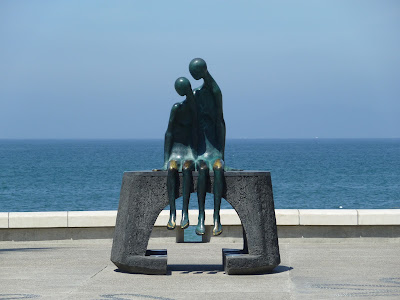 There are beautiful sculptures along the Malecon including sand sculptures. 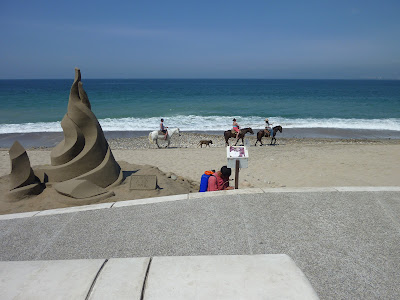 If you put a coin in the box under this sculpture, it moves! 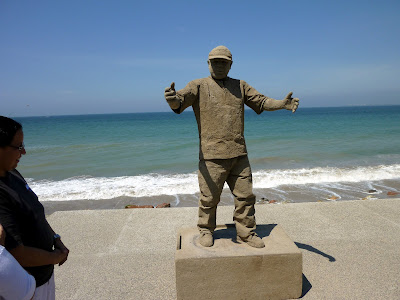 There's a real live person under that sand.  Apparently someone frequently spritzes him with water so that he doesn't dry out and crumble.
The distinctive crown at the top of The Church of Our Lady of Guadalupe dominates the downtown skyline. 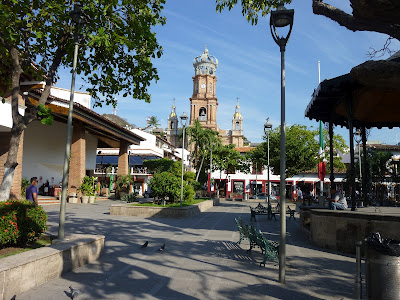 A Lenten Mass was just ending when we were there in the early afternoon. 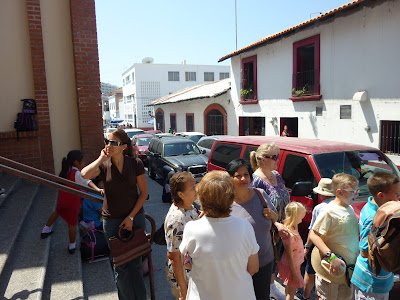 There was a group of school girls waiting for their parents to pick them up on the front steps of the church.  You can see one little girl in her red and white school uniform in the background of the picture.  The street in front of the church is typical of a downtown street, two lanes of one way heavy traffic.  Parents stopped their vehicles to pick up their children, effectively blocking traffic as there is no parking lane.  Cars abruptly cut off the other lane of traffic to go around the stopped car but nobody seemed at all put out about it.  It was fascinating to watch the traffic chaos and see how it all worked out without the  rules we are used to in Canada.
The downtown area is home to small shops, flea markets, and pubs. 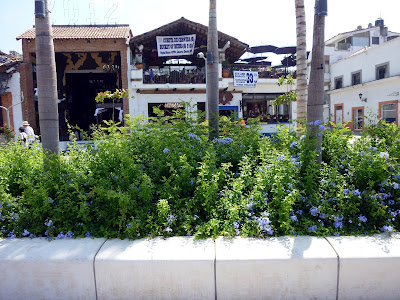 There are colorful souvenirs and clothing as well as jewelry for sale. 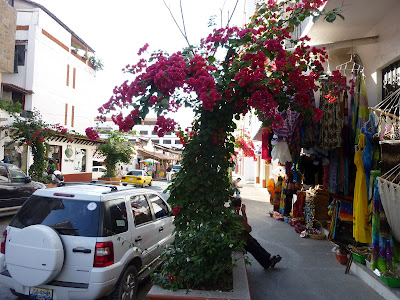 Plants flourish in the warm climate.  I don't know what kind of flowers these are but there were a lot of them wrapping themselves around posts.
Walking along the Cuale River bank we saw this tree. 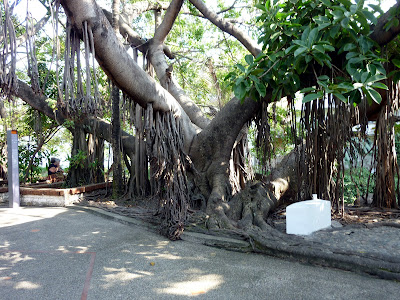 A nearby vendor told us that it is a rubber tree.  It was so large that I couldn't get the whole tree in one photo.  So beautiful!  Going through these pictures this evening makes me long to go back.  I have no doubt that Dan and I will take another trip to PV in the future.

Mt stepson visited a friend in Mexico. His friend's family were very kind to my stepson and he had a wonderful time.
I can see why you would want to go back...it's a beautiful country.

Aren't the sculptures on the Malecon wonderful? We saw them when we were there years ago.