Dan and I went to Rhythms of the Night, cruising across Banderas Bay to Las Caletas, where John Huston lived for many years, and it was definitely a highlight of our trip!
We left in the late afternoon from the marina. 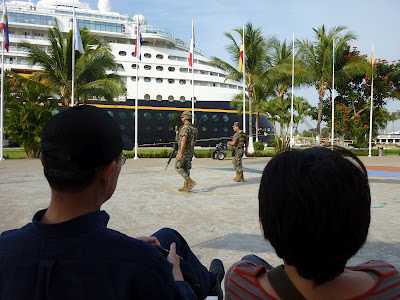 The ship in the background is a Disney cruise ship.  Massive.  I'd never seen a cruise ship in person and was quite stunned by the immense size of it.  The guards are heavily armed as they patrol the marina.  I would have loved to have taken a picture of one of them with my sock-in-progress but I didn't have it along for the evening.  Of course it's entirely possible that the guards might have arrested me on the spot had I stopped them with pointy sticks in my hands (and that wouldn't have been good) but talk about a great picture if they had agreed to pose for me!
The boat trip took about an hour to get to Caletas and the staff made sure that everyone was entertained and served refreshments along the way.  The passengers had trouble standing and walking on deck while we were sailing but those guys could carry two drinks in each hand and climb the steps to the top level of the boat without spilling a drop.  As Dan said, they obviously had done that a few times before. 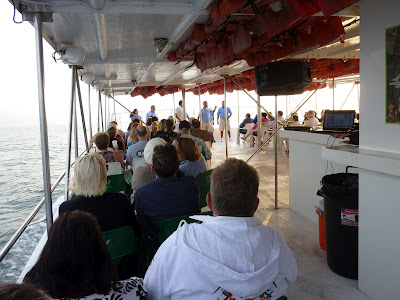 When we arrived at Caletas the sun was setting.  The shore was lined with tiki torches and the dinner staff waiting for us.  It was so beautiful! 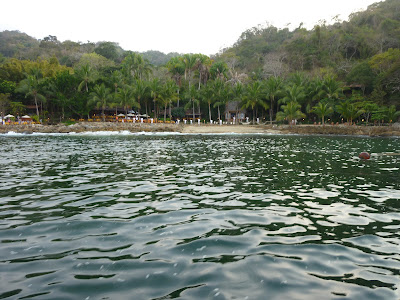 Notice the little waterfall in the center of this picture. 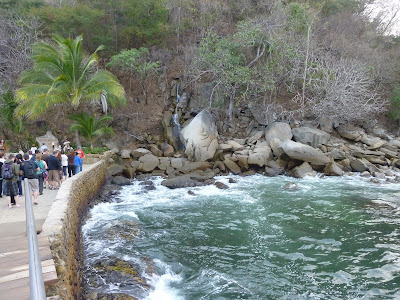 As we walked up the path the dancers and musicians that would perform for us later in the evening welcomed us.  They represented ancient Mexican civilizations and wildlife. 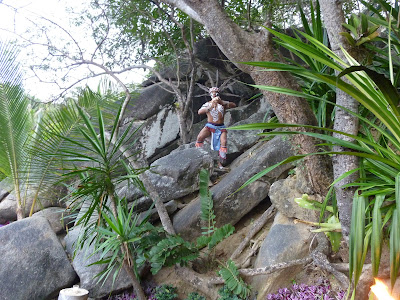 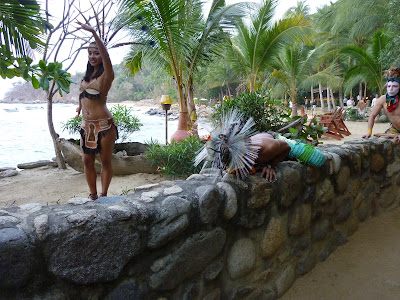 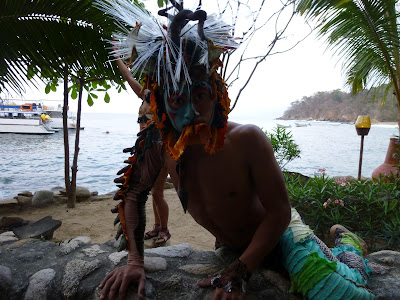 Then we had a lovely dinner in the dusk, listening to strolling musicians and to the waves lapping at the shore.. 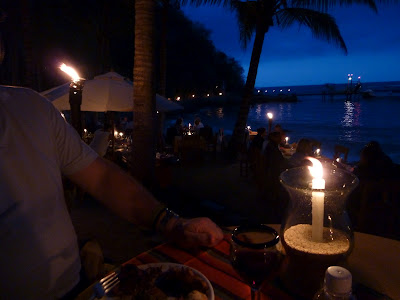 After dinner we walked further up the path to the outdoor theater.  We were allowed to take some pictures of the warm-up part of the show but then were asked to turn off the cameras for the main event.
This guy was the comedian to warm us up.  Without speaking a word of any known language, he managed to crack everyone up. 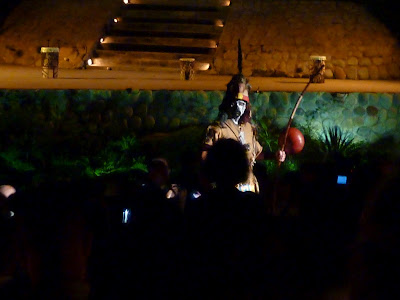 And these guys up the trees right over us were simply amazing, giving us a taste of what was to follow. 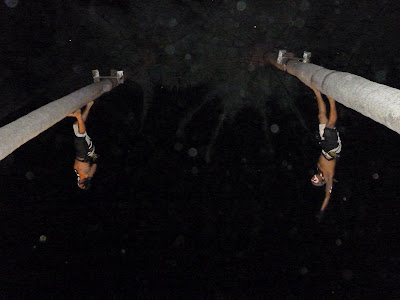 The show was superb and reminded me very much of Cirque du Soleil.  I found out later that the creative director and choreographer is a retired Cirque du Soleil performer.
The only downside of a wonderful evening was hearing people calling for doctors shortly after the show began.  We weren't close enough to see exactly what happened but people around the incident were turning on their cell phones for light.  I heard someone say that he had a history of cardiac problems.  There must have been a doctor in the audience because he was bent over the man for a long time.  As we were leaving to get back on the boat, a woman was asking everyone for aspirin (not Tylenol, not Advil) so I assumed that she was looking for help for the cardiac patient.  We never did learn exactly what happened but it made me feel kind of sick to my stomach to think about a family dealing with a loved one's heart attack in such an isolated location.
The boat ride back the marina was lovely under the night sky.  Away from the light of the city, the moon and stars were bright.  The staff of the boat got people dancing for a while. 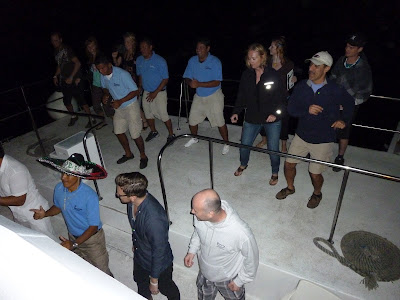 Then they mellowed the mood with romantic music and encouraged people to just enjoy the beautiful evening in the moonlight on the Pacific.
Posted by Susan at 6:03 PM

What an amazing evening (except for the heart attack incident).
What kind of food did they serve for the dinner?
That Disney Cruise Ship was gigantic. I bet they could cram a few thousand people on that boat!

I'm so glad you enjoyed your trip. Thanks for the photos and commentary!