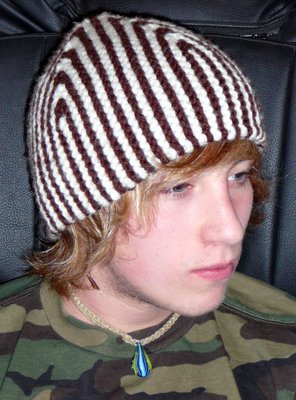 I finished Geoff's hat. It's a Knitty pattern and I used stash yarn. It's a funky pattern but I'm quite glad that it's done. It used double stranded worsted weight yarn and it hurt my hands to knit it for some reason.

I have started the knitting club at school again. I opened it up to grades 3 and 4 and have more kids than I know what to do with! There are so many beginners; luckily some of my knitters from last year can lend a hand to get the others started. I even had a mom and a grandma join us last time so that they could see what I was doing and be able to help their daughter at home. On his first day of knitting one boy commented that the girls seem to be better at it than the boys and then added that it was okay because boys eventually get smarter at things when they are men than women. All knitting needles stopped and there were many pairs of eyes upon him. Lucky for him that the bell rang to end recess just then and everyone had to leave. I don't think that the lad got that what he said was offensive. It makes you wonder what he hears at home. I'll have to take a moment and set him straight when I get a chance.

Here's another kid-bit. One of my colleagues was retiring last June. When she told her students about it one kid asked what retiring meant. Another one said, "Oh I know. It's what you do before you go live in the old folks home."
Posted by Susan at 7:18 PM

LOL ;) Kids are so amazing, they really crack me up at times ;)
You're whipping out hats one after another, that's so amazing! I really love this one, and it seems to have the perfect fit as well! Actually this is a pattern that I've wanted to do for long - now seeing it "in action", so to say, will get me going to cast on for it soon! Fantastic work!