The funeral for Dallas' mom was on Thursday afternoon in the tiny town of Spy Hill, Saskatchewan, near the Manitoba border. If I remember correctly, Spy Hill has about 200 inhabitants. There were approximately 350 people at the funeral. I guess that sums up how people felt about Bev Orth. She was a special lady.

It was a typical fall day on the prairies so I snapped lots of pictures as we drove. Autumn is my favorite time of year. The sun still has warmth but the air is cool. There was a good breeze that blew clouds across the broad expanse of the sky. 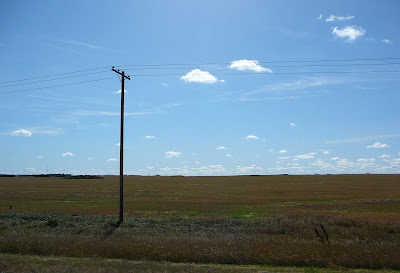 Near Regina the land is basically flat. The crops are harvested and the night frosts have turned many of the grasses and trees various shades of gold. Most farms enjoyed a good crop this year. Judging by the number of hay bales that we saw, the cattle should eat well this winter. 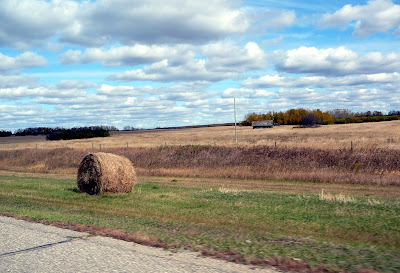 All of the land is not flat. There are a number of lovely valleys scattered throughout the southern landscape as well. Most of the time, they appear as pleasant surprises as you drive along the highway. The next picture shows one that surprised us shortly after we turned north of the town of Whitewood. 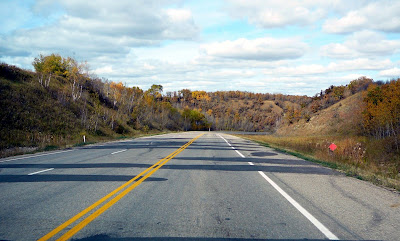 Spy Hill is near the town of Esterhazy. Esterhazy is home to most of the miners who work at the Mosaic Potash Mine, one of the largest in the world. It's difficult to capture the size of the mine on a picture. Seeing the large trucks and equipment crawling like ants on the side of the outside of the mine makes you realize just how vast it is. Apparently, it is way bigger underground. 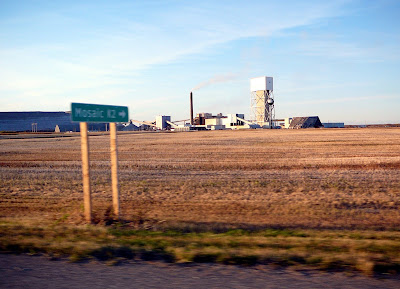 The sun sets early now. This obligatory sunset pic was taken at about 7:20pm as we drove home. 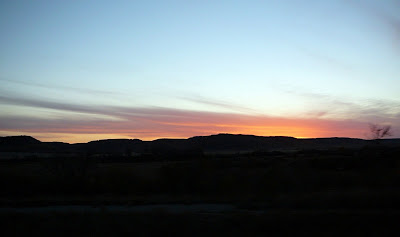 Absolutely loved viewing your pictures. They make me homesick. I moved to Switzerland from Regina 3.5 yrs ago and, even though I go home a couple times a year, I still miss so much about the prairies.