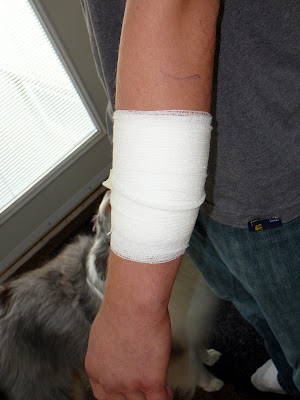 My son Geoff works for an installations company and was installing new carpet and lino in an apartment yesterday. Late in the afternoon, as he was finishing putting the baseboards up, he had an accident with the table power saw. It tore through his forearm to the bone. He was taken by ambulance to the emergency ward at the nearest hospital, shocky from losing a significant amount of blood. We didn't find out about the accident until he was at the hospital.

He is a very lucky young man (although I don't think he feels terribly lucky just now because of all the pain that he's in)! After consulting with specialists it was determined that the saw somehow missed the ligaments and tendons and the damage was confined to the muscles. This news was wonderful as it meant that he didn't lose the function of his hand and doesn't need surgery to repair the injury. He did need several layers of stitches to close the wound. The doctor was fine with Dan and I watching as they stitched up the gash and it was a shock to actually see the damage but it could have been so much worse!

Geoff had the doctor take a picture of the wound with his camera phone and I was all for posting it on this blog but we are lacking the proper software to get the picture off of his phone so you are spared the gory sight.

Apparently the new carpet took a hit from all the blood. Geoff said that it looked like a murder scene on CSI. I'm sure it did as an artery was severed. He was quite concerned that he damaged the new carpet. We assured him that the carpet is the least of anyone's worry; we're just so glad that he will be okay.

At this point, I would officially like to tell the fates that we have had more than enough excitement around here for the month of September and we are ready to go back to our dull, ordinary lives now.

By the way, the dogs are always interested in wounds. Their superior sense of smell alerts them to the odor of the blood (from quite far away). You can see Harrison trying to get closer to Geoff's arm in the picture.
Posted by Susan at 7:38 PM