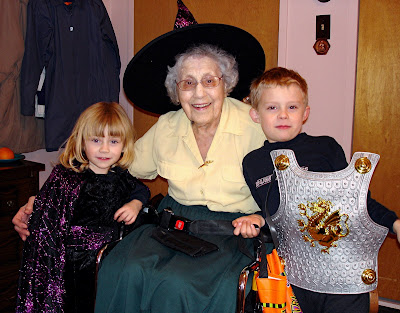 My grandmother, Elsie Pawchuk, passed away peacefully on Sunday, September 9, 2007. She is pictured with her great-grandchildren Katie and Christopher.

Granny was born in 1912 in Insinger SK, the second child of John and Rosie Copan, who were immigrants from the Ukraine. Her parents raised their children to work hard and be respectful and she held those values throughout her life. She told us stories about how strict her parents were, especially her father, but also how loving they were. In later years, she accompanied me to the Royal Red Arabian Horse Show annually in Regina and shared anecdotes about her father being a “horse man” and how well he trained and curried the horses.

She was always very close to her siblings, brothers Bill, Gordon, and Steve, and her sister Marian and, later, to their spouses Elsie, Ella, Tillie, and John, and their families. We’re very happy that she had a visit from Steve and Marian in June from their homes in B.C. She talked to her sister Marian by phone nearly every day, even when both of their hearing problems made phone conversations difficult. It seemed enough that they both knew the other was on the line at the same time.

Granny only finished grade 8 of her schooling because she needed to go to work as a housekeeper but she kept a thirst for learning until her death. She loved to play Scrabble and Brainteasers with her friends at Pioneer Village. She was fiercely independent and her mind was sharp to the end.

We are fortunate that she left a written heirloom for us by completing a book of recollections. In it she tells that she had happy teen years but they were too short. Her favorite activities were going for long walks and going to dances. She began dating Matt Pawchuk when she was sixteen. In the memory book, granny wrote that she liked him because he was very nice company and was popular. He also had beautiful dark brown curly hair. They were married in June 1930, over the objections of her parents who thought that she was too young. Upon her marriage she became a mother to Eleanor, Matt’s daughter, whose mother had died when she was very young. They lived with Matt’s parents in Theodore for four years before they rented a farm and moved into a little house by themselves. They eventually opened a small grocery store in Mozart SK and had two children, Gwen and Earl.

Once the children were into their teens they moved to Regina. Granny worked at Simpsons Department Store in the housewares and sewing departments. She sewed a lot of clothing for her children and grandchildren while working. Her grandchildren, Susan, Darcie, Bill, and Donna, knew that they would receive new, hand-sewn pyjamas each Christmas Eve. She also enjoyed knitting and crocheting. Granny was a fastidious housekeeper who liked to clean house and do laundry and ironing. She often told us how much she liked to iron and she ironed EVERYTHING, including sheets, pillowcases, tea towels, and underwear! As she became older and her eyesight deteriorated, her grandchildren could relax more when she visited, as she didn’t always notice that their housekeeping wasn’t up to her exacting standards.

Granny also cooked and baked for her family. They loved her bread, perogies, cabbage rolls and beet rolls. She kept their freezers stocked and also cooked with the ladies of the church for the various functions that they served. We have yet to taste a store-bought perogy that can compare to granny’s but Donna is continuing the tradition of making them for others. Granny’s favorite foods were bread and juicy, garden-ripened tomatoes.

Granny’s Ukrainian heritage was important to her and she taught her family many of the customs, especially those involving celebrations, by feeding everyone traditional dishes. After having the food baskets blessed on Easter Sunday, everyone went to her place to eat the contents. She had the family over for Ukrainian Christmas Eve as long as she was able to cook. She would often take her little grandchildren to church with her. They didn’t understand any of the services in Ukrainian but were fascinated by the singing and the splendor of the church.

Granny regarded spouses of her children and grandchildren as her own kids. She remembered everyone’s birthday and anniversary, and managed to find cards that were specific to the recipient. When she became unable to shop for specific-enough cards, she wrote the necessary ‘grand’s, ‘in-law’s, and ‘great’s on them herself. She delighted in her great-grandchildren Geoffrey, Carly, Brant, Christopher, and Katie. She was so pleased that her youngest great-grandchild, Kathryn Elizabeth, is also her namesake.

There are many happy memories of granny and grandpa dancing with the grandchildren to Ukrainian and old-time dance music. They would start them young by carrying the babies in their arms while they danced. When Don Messer’s Jubilee and The Tommy Hunter shows came on T.V. it was time to push the furniture out of the way and start dancing. They also taught the children various card games, always with great patience. Granny spent many happy times teaching grandchildren to cook and bake. When the little ones were in the room, Granny and Grandpa would slip into the Ukrainian language for the parts of the conversation that they didn’t want the kids to understand. Unfortunately, that practice didn’t help anyone to learn to speak or understand Ukrainian very well.

Granny’s religious faith was very strong and it helped her weather the difficult times in her life including the deaths of her husband Matt, her daughters Eleanor and Gwen, her brothers Bill and Gordon, her sister-in-law Elsie, her brother-in-law John, and her sons-in-law Geoff and Stan. Circulation problems necessitated the amputation of both of her legs and confined her to a wheelchair for the last few years. Her faith comforted her and she often told us that she didn’t fear death.

How the World Has Changed Since I Was a Little Girl

They invented radio and television.

They succeeded in preventing children from getting

Timesavers my mother never had are automatic washing machines and microwave ovens.

Women today are better educated and hold better positions in the working world but are not respected as much.

Some movies today are educational but some are violent and should not be seen by children.

Dating today is different because there are so many things to do – a lot more than there were when I was young.

I still like the old-fashioned ways of dating, dancing, and visiting.

My wish for the future is for you to be happy, healthy, and content.

Your Grandma was a really neat lady. I too lost my Grandma just 2 years ago. I wish she had written something like your grandma did for yall, but a las she didn't. I loved reading about your Grandma. Thanks for the great post. Maybe she is up in Heaven teaching my Grandma to dance!

What a wonderful tribute to your Grandmother.

I was looking for info on my family and ran across your blog. I wonder if you would write me regarding the Pawchuks. My great-grandmother was born Mary Pawchuk in Austria but immigrated from Poland. I am trying to find her family. I have no information at all about them. I can be reached at crystal.reichard@yahoo.com. Thank you!