Several months ago, we noticed that one of the homes in the neighborhood had a new circular driveway and a pedestal in the front yard. Soon a large gargoyle had been mounted on the pedestal. It seemed like a strange choice to me. The house is a regular bi-level in a regular neighborhood on the outskirts of a regular prairie city; the gargoyle seemed more suitable for a large building in a large urban setting.
Then the gargoyle began entertaining all who passed his way.
From donning feather boas to shades and ties, this dude has amused me almost every day. He dressed for our local pro football team games by wearing the team jersey and painting his face. He wore a Hallowe'en costume.

Here he is in his Christmas duds. 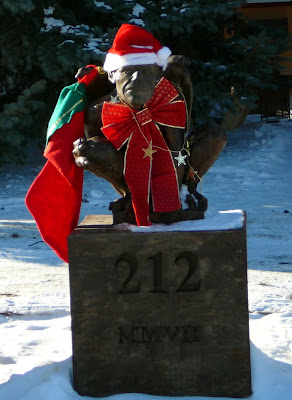 Clearly, the homeowners have a great sense of humor!

In other news, yesterday was an exciting day in several ways. We saw our son off to two weeks in Jamaica with his birth father and family. He was one pretty excited guy! What a wonderful extended family he has found in his birth parents! Both are bright, personable, and caring people and between both families, Geoff has five younger half-siblings. I was always a little sad that he was an only child and am glad that he has more family now. I'm sure that he will have lots of news and pics from his holiday to share with us.

Here is his youngest little sister at the airport enjoying her chocolate milk while waiting for the flight yesterday. Who wouldn't be happy to add this little cutie to the family? 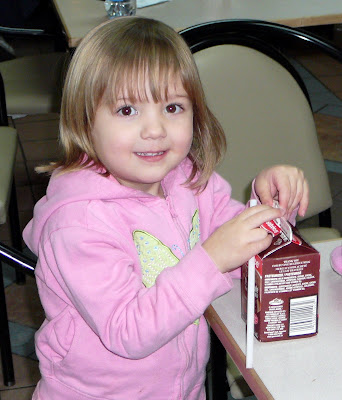 The other excitement from yesterday wasn't nearly as much fun as Geoff's trip. We have been battling a mice infestation in our house this fall. I don't know where the little suckers are getting in but they invited all their friends and relatives to Chez Zivec Mouse Inn. I read in the newspaper that mice are a problem for a lot of people this year because the last two mild winters have allowed the mouse population to get out of hand. A pacifist by nature, I started the battle against the meeses by buying one of those no-suffering traps that uses a battery to zap the critter instantly and painlessly. It cost a lot of money and doesn't work very well. When it became apparent that the mice were pretty much laughing at my efforts to rid the house of them, we put down regular mouse traps. Most of the time the mice ate the Cheez Whiz out of the traps without springing them. These are obviously not your basic stupid mice.

I thought Carmen's cat might help us out but I don't think that mild-mannered kitty would kill a mouse if it ran over him. We were forced to contact an exterminator who provided us with rigid plastic traps that the mice could enter to get the poisoned bait stuff but that the pets couldn't get in to. I have to admit that this method works pretty well and the mouse population in our house is much smaller now. However, the mice don't just eat the bait and neatly exit the traps. They pulverize the bait and spread it around as a fine powder.

Last night, Dan took the bin of dog food out of the broom closet in the kitchen to take it downstairs to refill it and left the closet door open while doing so. Unbeknownst to us, the mice had made a big mess of the poison bait in the back of the closet. I saw Pocus sucking in the warfarin as fast as his little mouth could eat it. The only other dog around the kitchen at the time was Austin so I didn't know if he got some too.

I immediately grabbed the bottle of hydrogen peroxide and dosed both dogs to induce vomiting. Then I phoned the emergency vet on call. She asked if I had any activated charcoal. I had attended a pet first aid course in 1995 so I dug out the first aid kit that I had purchased at the time and sure enough, there was charcoal. Following her directions, I made a charcoal slurry and forced it down both dogs' throats. What a mess! But worth it. I went to the vet clinic today for Vitamin K treatment to administer to the dogs for the next three weeks. It seems we are out of the woods, thank goodness!

If you are a dog owner I would strongly advise you to have hydrogen peroxide and charcoal on hand. I'm sure that being able to quickly use both products made the difference in this situation.
Posted by Susan at 4:42 PM

The mice in my house seem to really like chocolate - I cut Rolos into 6ths, and the carmel helps keep the chocolate on that part of the mouse trap.

Glad to read that the dogs are out of the woods - Hydrogen peroxide is a great thing - made my lab puke up the corn cob she had eaten in August - will have to get some charcoal, but we don't use poison since we had a previous lab mix eat something she shouldn't have, and died.

We used peanut butter on our traps and found out accidently that a bucket of water works great. We had a leaky kitchen sink so had a big pot under it. Mice would fall in. That thing caught more mice than all the traps put together. Of course it grossed me out and I always made husband empty the bucket. Our cat was worthless when it came to catching mice too.