a good day to stay inside 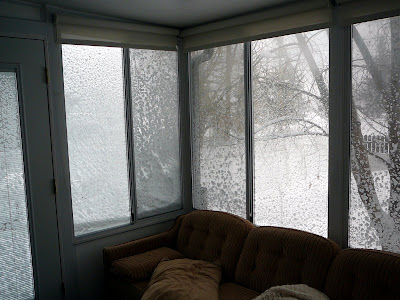 So not Jamaica. This is the view from the sunroom today. We are in the midst of a blizzard. It's causing lots of havoc with travel of any sort around here.
Yesterday was a balmy 4 degrees C (about 40 F) with no wind. It felt like spring! There was another fun match at the local dog club and they had to put buckets all around as the melting snow was leaking through the roof in lots of places.

After the blizzard ends, we can expect brutally cold temperatures for the next few days. The forecast for tomorrow is a windchill of -41 (that's about the same temp. for both C andF)! Definitely not spring.

I didn't feel like freezing my fingers to take a picture of them outside so they are modeling the coats indoors. They're not very obedient models. All they wanted to do was play. These coats were custom made for them by Patrice of Sweet Blessings Boutique on Etsy. They are very well-made and Patrice is great to do business with! She also sells adorable children's clothing on her Etsy and eBay sites.

I'm still waiting for my knitting machine to come in the mail. The fair isle attachment was delivered on Friday but not the knitting machine itself. One would think that two packages mailed at the same time would be delivered at the same time but Canada Post apparently doesn't agree so the attachment is just teasing me until I can play with it.
Posted by Susan at 11:43 AM

Hi Susan, I read your blog. I read your posts on Townies. I just watched the Mrs. Hughes video, and nearly wet myself. Thanks for that. I'm a dog loving (Cavaliers), knitting stubble jumper, too, although I've lived in Alberta half my life, I'll never be an Albertan. Too proud of Saskatchewan.