February 19 will be my blog's second anniversary and I'm planning a special give-away! Be sure to check back next Tuesday for details....

Today, I have a couple of kid-bits finally. I went to visit my class a couple of days ago. Even though I was only there for a half an hour the little darlings supplied me with two kid-bits. Little ones are so funny!

The kids were eating cupcakes when I got there. It was one of the boy's birthday. I said, "So, what are you now, sixteen?" All the kids laughed and the birthday boy said, in some surprise, "No, I'm seven. If I was sixteen I would have to be in Grade 6 or something!" I'm pretty confident that said child is bright enough to avoid that possibility.

I gave the kids a chance to tell me something about them that I didn't know before I left at Christmas break. One little girl, one of the youngest in the class who had just turned six before the end of the year, sighed dramatically and told me, "It was the worst Christmas of my life!" When I asked why, she said that she went to her grandma and grandpa's out of town and she didn't like being away from home at bedtime and there was nothing she liked to eat there. Lest you think that they didn't offer much in the way of Christmas vittles, be assured that I taught this child's older sister and know enough about the family that I'm sure their Christmas dinner was a feast of turkey and the fixings. I wonder what this little girl's idea of good food is at her age. I'll bet it's something out of a can.

I'll leave you with a couple of pictures of our front yard after Dan dug out the driveway from our last blizzard. It would be nice if we knew it was the last blizzard of this winter but, around here, large snowfalls have happened in April some years. 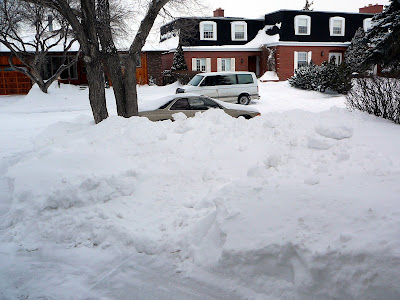 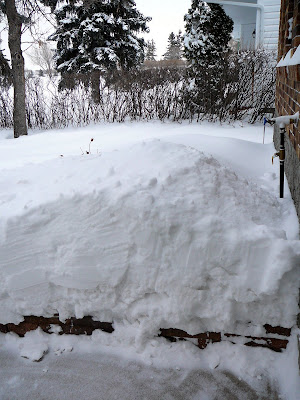 Beautiful, beautiful, backbreaking snow. It's a love-hate relationship. Wish we had some snow here. Today will be in the 60's and that's fine for yard work but I'd really rather be out tromping in the snow.