Purely out of curiosity, I added dyes to a skein of sportweight 90% bison/10% nylon blend to see how the dark natural brown color would take the dyes. I think it's a little like the highlights that I have added to my own hair at the salon.
Here's the result of the highlights treatment. I left the white tie to show where I didn't dye it so you can see its natural color. 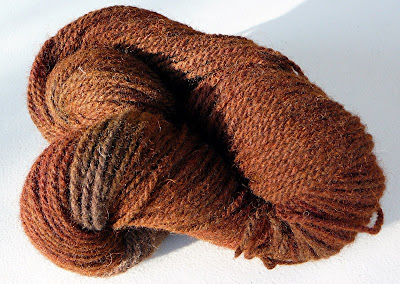 These pictures were taken in natural daylight which really brings out the beautiful colors. It's not as pretty in artificial light.

The most amazing thing about this little trial is that I pulled the skein out of the crockpot in the morning, washed and rinsed it, then realized that there was no way it would air dry in time to take to the Buffalo Gold booth at Agribition the same day. So I put the skein into a lingerie bag and popped it into the dryer. I was very nervous about it. It's one thing to throw a knitted garment made from the yarn into a dryer but it's quite a different thing to take a chance on skeined yarn and I was afraid that I might wreck a very expensive luxury fiber so I checked on it a few minutes later. It was just fine so I tossed it back into the dryer until it was dry.

Wow. Not only did it not shrink but it was even more beautiful than before it was washed and dried. It was fluffy, lofty, and incredibly soft! We took turns cuddling it next to our necks at the booth that afternoon. This fiber is incredible!
Posted by Susan at 6:28 PM

No wonder you cuddled this yarn all day, it looks really yummy!