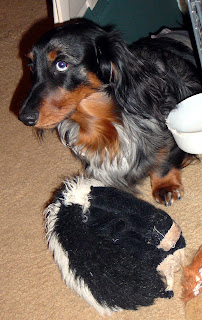 Dearly beloved,
We are gathered here to today to say farewell to Bentley's Skunk who finally succumbed to a slow death from being vigorously shaken while the dog dishes were filled twice daily, methodically eviscerated, and finally, decapitated.

In his youth, Skunk was a fine specimen of a stuffed animal. He was plump and fluffy, and made wonderful squeaks and screaming noises before his noisemakers were disemboweled. He was Bentley's favorite animal to kill. His long tail snapped about delightfully when he was shaken.

He leaves to mourn his passing his doggy and human family, and his friends, especially Chippy the Chipmunk, the Octopus, and the Spotted Puppy, all of whom are also suffering from various stages of evisceration and face mutilation but are also much loved by Bentley. 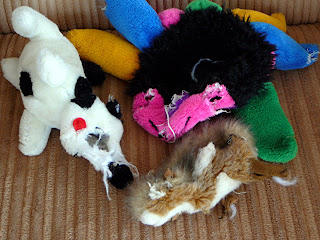 As a final act of selflessness, Skunk generously donated what's left of his body to be subjected to continued mealtime shaking. However, his head has now left this life to serve a higher purpose, perhaps as a favored toy for another dear pet in Heaven.

ROTFL!!!! I had to read it again because I thought you were telling me abt a dog until I read the vigorously shaken part! LOL Too funny!

LOL I share your pain. For the longest time we had "Monkey paw" and "duck foot" as toys...the rest of the monkey and duck were looooong gone. It is just not quite as satisfying to have them new. They must be dead. (It's in the dachshund code.)

ROTFL....that was hilarious! Our toy poodle has a stuffed toy that he beats up all the time. We stock up when PetCo puts the seasonal toys on sale. :~)