It's raining here in Saskatchewan. It's supposed to continue to rain for a couple of more days too. It's also chilly. My fingertips were going numb this afternoon (slight bit of Raynaud's Syndrome) so I caved and turned on the furnace. It could be worse - Calgary got a dump of snow.
I finished the first Zigzag Anklet from Knitting Socks with Handpainted Yarn. 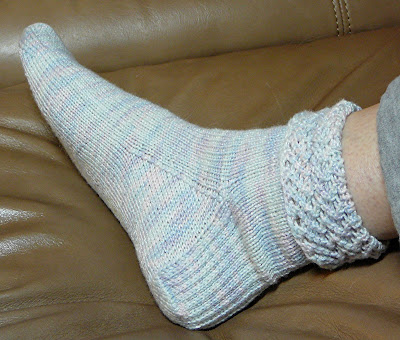 I used Panda Wool in the Hydrangea colorway. It comes in 50 g skeins with only 170 yds. and I bought two skeins from Little Knits a while ago. I figured there would be enough for anklets. I hadn't thought about the fact that this pattern's anklet folds over itself so isn't really a short sock yarnwise. 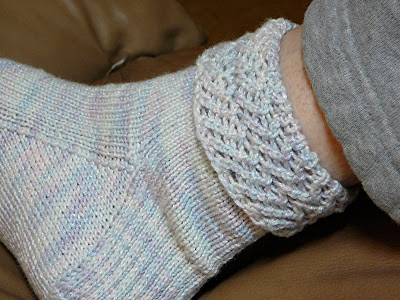 After the heel turn, I started to panic about running short and ordered one more skein. I had enough after all. There is a whopping 8 g left of the skein. 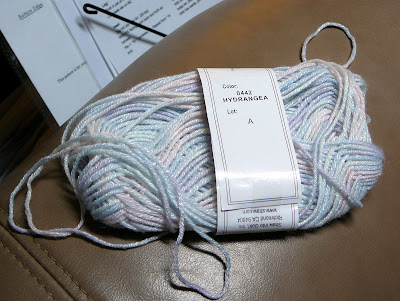 I've been spinning up some merino from Sheepish Creations on Etsy. It's the Maid Marion colorway. The plan is to keep the color order while spinning the singles and then navajo ply it. 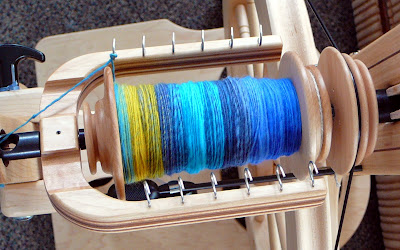 I left it for a few minutes while I took a phone call this afternoon and came back to this: 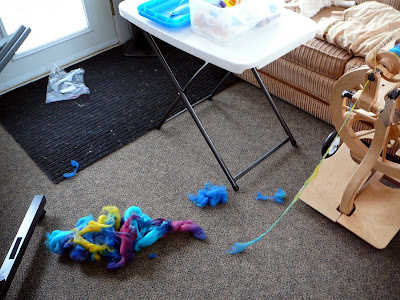 Apparently it was too much temptation for a small Dachshund on a rainy day.

Now this is what I have to organize to keep the color sequence going. 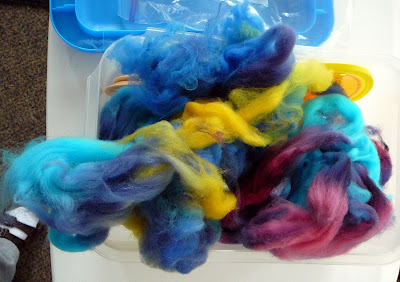 SMIRK - sorry- had to laugh. The thought of the little guy murdering your fluff made me smile! Good luck!

I'm sure glad I don't live in Calgary anymore :)
We've been getting nice warm temps here and low humidity. I also have the numbing but just in my pointer fingers..they go white. It just started about 4 years ago.

In a way it is adorable! Sorry you get to untangle it though.

Nice socks!!! And while it just seems wrong to put the furnace on in June, I've put the a/c on in December so I figure its the same thing. If it's cold or hot enough to use the needed devices, I don't care what month it is, I'm going to use them.

And OMG to the fiber mess!!! He is a cutey though!

Oh. It really looks like someone had F.U.N.!!! We had a cold week last week and a rainy weekend. It is warmer now but still rainy. Plants are happy after all the sunny and windy period that dried the ground out.
Nice socks!