There was never a danger of March coming in like a lamb in these parts. March is still most definitely winter. Yesterday, we broke a weather record for the coldest March 1st daytime high in 130 years, -25C (-13F). Yesterday morning the wind chill felt like -41C (-41.8F) (C and F are approximately the same at -40).
Honestly, when I took the dogs out into the backyard it really didn't feel that cold. The sun was shining and we were sheltered from the north wind. Then I opened the front (north) door to get the mail and the wind hit me. It felt like an alternate universe, such is the power of the wind on the prairies.

March is a tough month in Saskatchewan. We feel like it should be spring but it rarely meets our expectations. Sometimes Mother Nature teases us with a balmy day or two but then smacks us upside our heads with another cold spell/blizzard. If it does get spring-like, the snow melts too fast for the frozen ground to absorb and we have problems with flooding (not at our house but lots of other places that are on lower land). The ground was saturated before it even snowed last November because last year was ridiculously wet and we have had a ton of snow since then. A slow melt would be best but it's hard to like that option at this time of year.

The upside is that the daylight hours are noticeably getting longer and the sun has warmth as it shines into the windows even on the coldest days. The big old jackrabbit that's been venturing into my garden through a hole in the neighbor's fence isn't snowy white anymore but looking more salt 'n pepper-ish.

I haven't been very productive lately. I got tendinitis in my thumb so I've had to stop most fiber activities to let it heal. I'm not sure what exactly brought it on but it may have been a longish spinning session. The depressing part is that, out of my whole body, my hands are probably in the best shape. They get the most exercise and are rarely still (ahem, unlike the rest of my body). So I've been trying to take a break from spinning and weaving and only do a little bit of knitting.

I do have a picture of a Pimpelliese shawl that I've been knitting out of handspun BME Snow Capped merino/bamboo/silk. It was fractal spun and the color sequences are blending nicely. 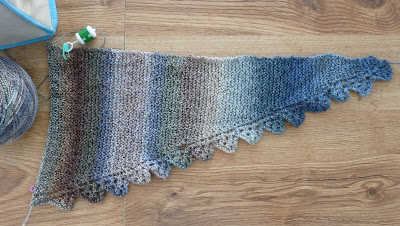 I have been making alot of shawls lately,I love this shawl,beautiful colorways,phyllis

The colours in your shawl are really lovely Susan.
I sometimes get aches in the area around my thumb joint when I spin or knit for hours.
Yesterday we had blizzard like conditions and then a few hours later the sun was shining. I think the worst thing this winter has been the cold winds.

Stunning colors. I love it when yarn and pattern are well-met.