Really. Not an April Fool's Joke.
I sold the Roberta espinner a few weeks ago, then used the funds to buy a Majacraft Suzie Pro. 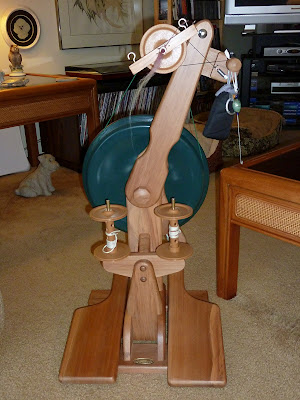 It was a bit of a gamble. I sold my Majacraft Rose because it was causing knee pain. I was operating on the assumption that Suzie Pro's heavier drive wheel would provide greater momentum and my knees wouldn't have to push the treadles to keep it going.

So far, so good. I haven't spun a lot on the Suzie Pro yet but my knees have been fine with it. The Majacrafts are such lovely wheels, both esthetically and mechanically.

It was just after I bought this wheel that we learned that a major home builder here in Regina has offered our son a big painting contract. So we have been setting him up in his own business. It's an exciting time!

Dan's van, which is in good condition considering its birthdate is 1994, will now become Geoff's shop vehicle. Dan will take the 1998 van that I currently drive because he needs the room to transport his hockey equipment. That meant shopping for a vehicle for me.

The criteria was comfort. It needs to be comfortable for me to get in and out and to sit in because there are fibromyalgia days when I don't move very well. We decided to check out new vehicles so that we would get a sense of each manufacturer's seating.

That was a mistake.

After sitting in a GMC Terrain, nothing could compare. The Terrain was first produced in 2010 so there aren't used ones floating around yet. We bit the bullet and bought a new one. Here are my other four new wheels. 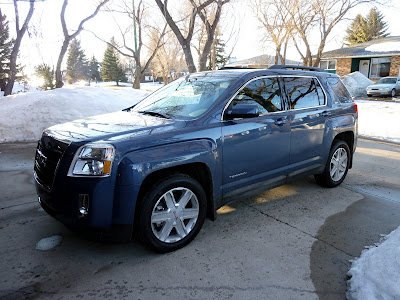 This was a huge purchase for us. We aren't new car people. We usually maintain and drive our vehicles until they are almost held together with twist ties. But oh, what a sweet ride it is! It has AWD for our winter roads, a back-up camera, Bluetooth, OnStar, XM radio, and heated leather seats. I can plug my ipod into its port and get my music through the "infotainment center".

I found a nifty fabric barrier that goes behind the front seats to keep the dogs in the back and a seat cover to protect the back seat from them.

All of this means that there will be no more impulse spinning wheel buying for me. I'm glad that I already have my fiber tools because my budget will be much, much slimmer in the future.

You can see in the above picture that we still have a lot of snow but it has been warm enough the last couple of days to melt quite a bit of it. There is a huge lake in the back yard. Lest we get too excited about the late arrival of Spring though, the forecast is for a huge snow storm on the weekend. Like we need any more precipitation in these parts. Sigh.
Posted by Susan at 5:04 PM

Congrats on all the new wheels and the business. Busy time for your family! Enjoy...

God, it took me until the end of the post to understand the title! Congratulations on the new car!

Congrats on your new wheels!! there is something to be said about GM comfort!!!

Wow...what a luxury to drive a brand new vehicle!!
You do have alot of snow still. It's getting to feel very much like spring here in Ontario finally.
I luv my Majacraft Rose so much that I will keep her forever. I hope your new Majacraft wheel works out for you Susan :-)

I loved this whole post but was really glad to see that we're not the only family who considers our dogs when buying vehicles! (I hate to admit it, but we bought this house because of them, too. HUGE lot.)

"Road Trip!" You could test it in a run to Olds, my dear.

At first I thought you bought 5 new spinning wheels....lol. Both the new wheel and the new ride look great.

Congrats on your new wheels, both for indoors as for outdoors. have fun with them! The car looks great! We always buy used cars, too, just need one right now, a big one, to hold 4 dogs, at least two people and enough space for agility trial gear or luggage if we one day decide we want to go on vacation... And that on a very reasonable budget!
Tina