Happily, yesterday's snow melted and the weather forecast is much improved for the next few days.
I noticed the first rosy shoots of rhubarb poking their little noses out of the cold, wet earth today. About time.

You have to look really hard to see them because they're still very small. I drew pink arrows to show where they are

I took a look back in the blog to see when the rhubarb came up in previous years. Last year it was April 3. I missed taking one in 2009 and 2007 apparently. Here is 2008 and 2006. I was surprised that the 2008 pic was taken on the same date as today's although the rhubarb was much further along then. Early April is more common for the start of spring.

I noticed from the sun room that one of the dogs had sneaked a rawhide outside. Austin was chewing it and Cooper used the situation to make a game of it, getting goofy and running in circles around him. 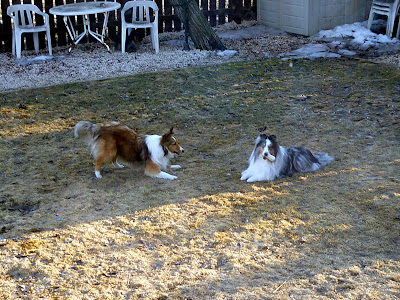 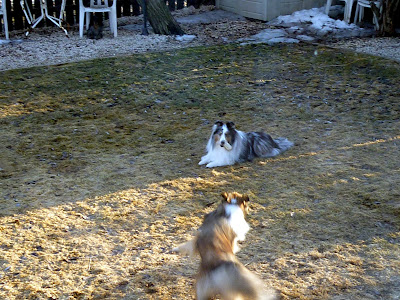 Coop is such a happy dog! Austin was enjoying the situation too.

Susan, haven’t we talked yet some time ago about our homes being on the same “ring” around the earth (is it altitude or is that just for hight above the sea?) and still having these different climates? It is warm like in summer over here for a few weeks now, and very very dry. It will be a lovely long Easter weekend here with Good Friday and Easter Monday being holidays. But your rhubarb knows spring will be around at your place, too!
Tina in climatically spoiled southwestern Germany

You have convinced me to plant rhubarb! In the Chicago area of the bottom of Lake Michigan, we are still cold, as in below freezing temps. We had a few nice days, even got to spin outside but I think my plants froze yesterday. If rhubarb is that hardy, I must try it. Better than replanting.....

Austin seems to take it easy, watching Cooper making a fool of himself. :o)
It's cold and windy here, my fingers are cold. Outside is a wet mess. Sigh.