A rite of Spring for me is the first sight of the rhubarb stalks poking out their rosy shoots in the garden. Spring has been very slow but steady around here this year. The snow melted gradually and the temperatures hovered below or just around seasonal for the most part. Then last Monday the temps soared to 28C (low 80s F)! The heat didn't last but we had a pleasant week. Finally, the rhubarb made its appearance. I checked my blog and discovered a similar pic from April 7, 2006. So Spring is a little delayed this year. 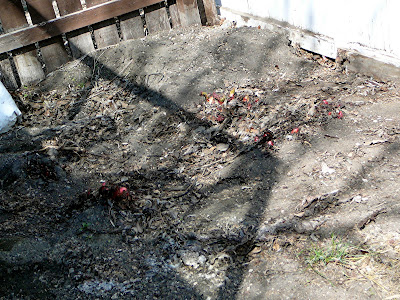 There is a massive snowy blizzard hitting parts of Alberta and Saskatchewan this weekend. So far we haven't seen snow but that could still change. We're guaranteed lots of rain anyway and it's needed. One thing is sure, the weather is never boring here in Sask.! They say if you don't like the weather, wait a few minutes.

While I was outside with my camera, I took these puppy pics. 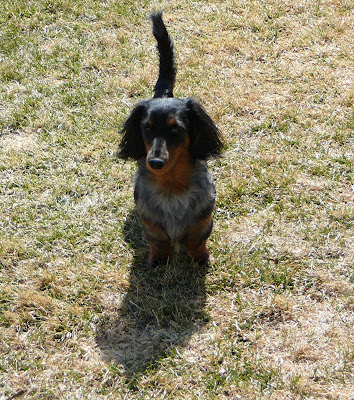 I was on the deck looking down when I snapped this pic of Bentley so that's why it looks like his tail is growing out of his head. 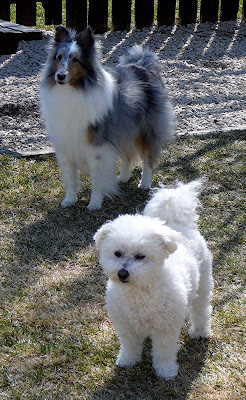 Harrison and Poke are happy to be enjoying the nice weather while it lasts.
Posted by Susan at 1:34 PM

What bits of green we had are now buried under 12 inches of snow which is the storm that's hitting Alberta. It's hard to believe that it was so warm and sunny a week ago.

The dogs looks like they are enjoying the fresh air and warm sunshine.