thoughts on children in public

Geoffrey - 1 week
I believe that today's post title is a bit redundant. One of the definitions of the word public, according to my online dictionary, is "open to all persons". Children are "persons", therefore "public" automatically includes children.

2 years
My mother adored babies and toddlers. She took the greatest pleasure in just watching them sleep or breathe. Interacting with them filled her with delight. We often said that she hardly heard a word of the homily in church if there was a baby nearby. I guess it's not surprising that I grew up loving little children too. I took Early Childhood Education in university, worked in day care while I was a student, and was a primary teacher for most of my career.

6 years
When I got married I desperately wanted to become a mother. Things didn't happen naturally though and there were many years of hopeless longing for motherhood until we adopted our son. He was five days old when we first saw him and took him home. I have to say that the moment that he was placed in my arms was probably the most emotional time in my life. Adoption is a little different emotionally from giving birth yourself and I'm not talking about escaping the baby blues. The joy of having the new baby is tempered with the sadness of knowing that your joy comes at the expense of someone else's heartache. We did not know Geoff's birth parents until last year but I often thought about them and wished that I could thank them personally. It was wonderful to finally have the opportunity to do so when we met! 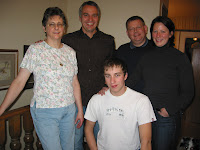 As an adult, with all of his parents!

We watched the movie "Juno" on Saturday night. It's a touching and funny movie and I highly recommend seeing it if you haven't already done so. It was particularly poignant because of our adoption experience. I guess that's why Stephanie Pearl McPhee's blog post today seems so important to me. If you haven't read it yet here's a link to Yarn Harlot. Go ahead and read it. I'll wait.

Here's the comment that I left on her blog:

I think that most of the people who fuss about noisy children never had one of their own. I did. Said child is now 21 but I remember the colic, allergies, tantrums, meltdowns, etc. very well. When I hear a child losing it in public I try to say to the parent, "Been there. Done that. I understand." As for happy baby noise, pure music to my ears.

I also have been a primary teacher for almost 30 years and tried my best to make sure that my class was prepared for public outings by letting them know what the agenda would be and making my expectations of their behavior known ahead of time. 99% of the time I was proud of their behavior. Still, there were people who should have known better and still complained. I remember taking my class to swimming lessons at the Y and having the receptionist freak out at the kids every time they entered the building. The kids were not misbehaving; they were just talking. When the receptionist complained to me that the noise would disturb the adults who were there to work out or whatever, I countered by telling her that they are kids and kids talk. Once we left the building, I usually had to reassure the kids who she yelled at by letting them know that they were not in the wrong and the woman didn't understand kids. Some of those kids got really upset and it burned me that one adult had that much power to hurt their feelings over actions that are completely acceptable coming from adults.

All that said, however, I have witnessed a perfectly well-behaved student turn into an obnoxious brat as soon as a parent was in sight. Some parents really don't get that they are tolerating outrageous behavior from their children and, in fact, are encouraging it by thinking it's cute and precocious. These parents are in the minority, thankfully, but I see more of it recently than I did at the start of my teaching career (the whys and wherefores of this statement are also a discussion for another time.)

I was touched that Krista took the time to search me out and leave this comment on my blog about it.

Hi Susan, I read your post on the Yarn Harlot's blog and wanted to let you know I really appreciate your thoughts on the issue. When I attended Rhinebeck last year I took my 2 month old along. He was great, but one morning at breakfast got superfly upset. Why? Who knows? He just was. I was so embarrassed because I was worried he was disturbing everyone's breakfasts, but what could be done? It was the hotel restaurant, so short of room service there was no alternative. A lady came up to me and said, "I remember those days. Don't worry. He isn't as loud as you think he is." How reassuring! I wish everyone had such a kind attitude!

Thanks, Krista! Enjoy your little guy. It's true that they grow up really fast although not that it seems so when they're imitating "demon spawn", as Harlot says.

I've mostly had a good experience sense having my baby (now 7.5 months old). Oddly enough it was some actual "friend"s who seemed to need to point out how children can be annoying (not mine, but they knew I just had a baby). I've found strangers to be so kind sense I have had my girl!

Hey Susan! I am so happy you were able to get a great post from my comment. Your family looks healthy and fun, so you did something right! Keep in touch!