Well, Christmas has come and gone for another year.  We hosted breakfast and gift opening in the morning.  Darcie took a nice pic of son Geoff and his girlfriend Carmen. 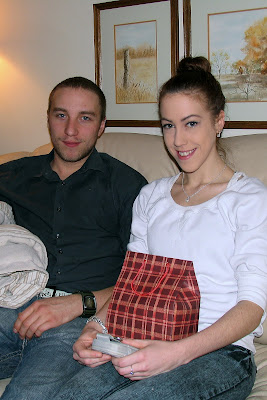 Cooper loved having everyone here. 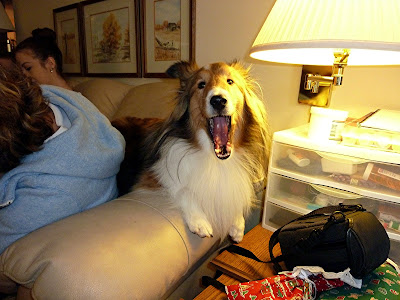 It was a beige Christmas here on the prairies - not quite brown because there was some residual snow and ice left from November but certainly not a white Christmas because of lots of ground without any snow cover.  The weather has been exceedingly mild lately with many days of temperatures above the freezing mark.  Christmas Day was 4 degrees C (39 F) which was almost record breaking.  If winter was like this all the time I would be a happy camper.  As we were driving home from Dan's sister's place in the afternoon, there was a spectacular sunset which I tried to capture on my phone.  The picture doesn't do it justice. 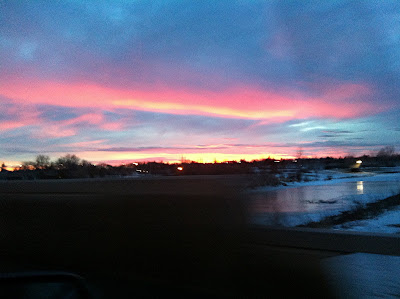 The only reminder that this is December and not March was the early sunset around 5 p.m.
The mild weather has lasted all week but some precipitation has been added to the mix.  There was freezing rain earlier today, turning everything into a skating rink.  I was glad to be able to stay at home and not have to drive anywhere. 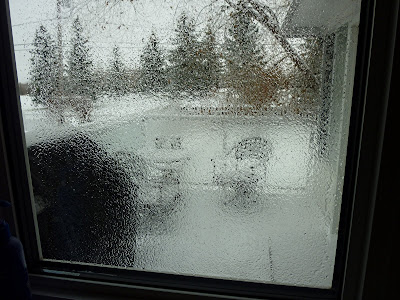 The rain has turned to snow now.  Austin and Cooper celebrated the new snow with a good run around the back yard.

It's still nice out.  Sooner or later, the bitter cold temperatures are bound to arrive because this is Saskatchewan after all but this lovely weather will make the really cold winter that much shorter.  I'm all for that.
Posted by Susan at 7:10 PM

I love Cooper's photo. He looks so happy.
We had snow, but it is rain in the forecast. Argh! And just as we were having so much fun!

It's been an odd mix here weatherwise this Christmas. One day mild and rainy, the next it's blizzardy and -15.
As long as it's cold enough to warrant Alpaca and Wool accessories I'm content :-)