in with the new

Happy New Year to all!
I have to admit that it doesn't feel like January yet.  Likely that's because we aren't seeing really cold temperatures.  Although it's cooler this weekend than it has been, the temps are bang on normal (-10C or 14F) and aren't supposed to stay cold for long.  In fact, Environment Canada's 7 Day Forecast is starred with an asterisk "denoting an abnormal temperature trend" because Tuesday's through Saturday's highs are above the freezing mark again, a couple of them at 5 and 6C (41 and 43F)!
So what do a couple of homebodies like Dan and me do when the winter weather is milder than I can remember?  Book a Mexican holiday, of course.  We are nothing if not ironic.
First, a little history.  The last time we went on a vacation was when Geoff was about 6 or 7 and we booked a rustic cabin at Clear Lake, MB.  It was a lovely vacation for the most part.  I'm not entirely sure why we haven't gone anywhere since.  As for flying, I've been on a plane once in my life at the age of 12.  Yeah, I know.  I might as well be a dinosaur.  So now that Dan is retired we have been tossing around the idea of a warm winter vacation.  Dan's sister recommended we contact her travel agent, the amazing Evelyn Poole, so I sent an email to her on Friday at suppertime and before 10 pm we had booked a week's vacation in Puerto Vallarta in late winter.
It hasn't really hit me yet.  At this point, I'm wobbling between feeling tentative and excited.  I hope my health problems don't flare up and I hope my dogs aren't miserable because they have never been without at least one of us around.  It's going to be particularly hard on Bentley because he is such a little velcro dog and I have spoiled the stuffing out of him.  On the other hand, it's Puerto-freaking-Vallarta!!
I will leave you with pics of said Dachshund.  I bought a C-shaped pillow (meant for nursing mothers) to have on my lap while spinning so that my shoulder doesn't have to support my arm in one position which caused tendonitis in my right shoulder in the summer.  The pillow was on the living room sofa when Dan called me to see how Bentley had burrowed through it.
"No, don't leave me when you go away!" 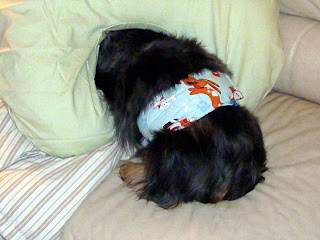 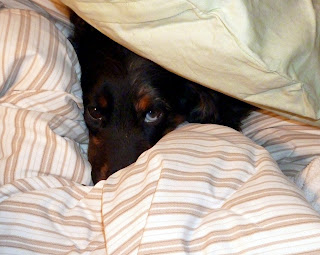 I know it's hard to leave the furry friends behind. We found a friend that could stay at our house to look after our cats and that made it much less stressful for everyone :-)

Woooo hoooo! Yay for Vacay!!
You'll have a fantastic time!
It will be hard to leave the "kids" it always is for me anyway but they will be sooo excited to see you home again.

OMG! How can you leave this little cutie? Vcations are overrated. Ah, just kidding!

Hope you have a wonderful time on your vacation. The last time I was on vacation I was lucky enough to have a good friend stay at the house with the fur babies.

It's been exceptionally warm here this winter. It doesn't feel like winter. Summer and Fall were late showing here so I'm figuring Winter will make a late appearance too.

congrats on the trip!! your furry friends will miss you but they will be just fine!!!

Have a wonderful trip. A house/pet sitter would be great for you. We usually use another family member.... wouldn't you be happy to leave teenage and adult children at home to fend for themselves and go play with furry friends instead.