more fun in the back yard

We have had two cold weeks this winter, one in November and the other a couple of weeks ago.  It's been lovely the last few days.  It was warm enough to be in the sunroom this afternoon without a coat!  It's unbelievable weather for the end of January. 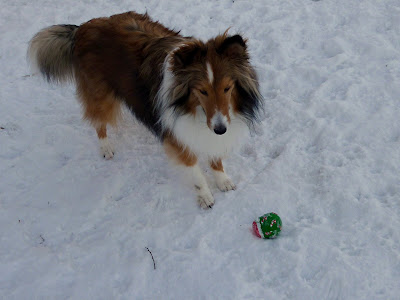 The dogs and I have been happy to be in the back yard in such lovely weather.  I found out about a new game that Cooper adores.  Dan keeps saying that Cooper has no interest in doing his business and only wants to play when he takes them out.  Cooper keeps bringing in a little squeaky ball and Dan keeps throwing it back out because he says it's Cooper's favorite toy.  I didn't understand why he figures it's Coop's favorite toy because Cooper only retrieves it two or three times when I throw it for him before losing interest in it.
Turns out I wasn't playing the right game with the ball.  Cooper doesn't want to fetch the ball nearly as much as he wants to play goalie for a soccer match (I know that most people in the world call the game football but that's a whole different game in Canada).  Dan doesn't throw the ball - he kicks it.  So I tried it.  Goodness, that dog would play that game all day long!
I'm not very good at getting the ball by him.  Dan is much better playing faux soccer than I am.  Cooper doesn't seem to mind my ineptness though.  I captured a bit of the game on video for you yesterday.  I'm a worse soccer player when I'm holding a camera than usual and then Austin got into the game by "killing" my feet, to boot!  (Get it, feet/boot, I kill me.)
Meanwhile, Robbie knows he looks gorgeous against the snow. 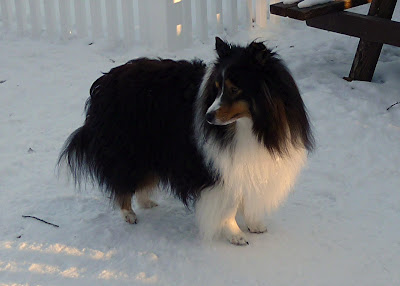 So does Bentley (when he stands still) but boy is it tough to get an outdoor picture that shows his dark face nicely. 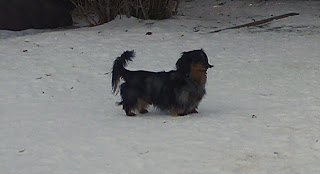 If you would like to see some real soccer moves here's a video of David Beckham impressing some cameramen while shooting a Pepsi video.  There is some controversy over whether it has been digitally enhanced but David Beckham says that it is all legit.
Posted by Susan at 7:49 PM

Your dogs are very high energy Susan!
I hear so many people talking about the weather...soon enough it will be scorching hot...YUK.

Love the dogs on snow! It's funny how they find their own entertainment. We just take so long to understand them. :o)