Another highlight of our trip to Puerto Vallarta was a tour of the city and nearby Mismaloya.  Dan heard an announcement at the hotel one evening that there would be a free city tour the next day from 10 am to 3 pm so we signed up.  I didn't hear the announcement, or much of anything really, while we were gone.  If Dan hadn't have been with me to let me know the important or interesting details, I would have missed a lot.  I have suspected for quite a while that I was losing some hearing but the trip really confirmed it.  It convinced me to get my hearing checked when we got home and I am losing most of the higher range of sounds.  I will need hearing aids at some point but can get by for now.

There were ten of us from the hotel to join our taxi van and driver the next morning.  We were exceptionally lucky to have Jose as our driver and he was the best tour guide ever!  Here he is cheerfully posing with my sock-in-progress while we overlooked the city from Ah Carumba! restaurant (he says he takes his first dates there). 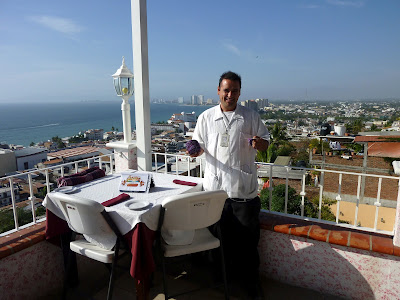 If you ever want to see the Puerto Vallarta area, get him to take you (padillajosemanuel@yahoo.com).  He's enthusiastic, informative, and just plain fun!  He suggested extra side trips along the way and asked, "See it or leave it?"  Of course we wanted to see everything.  The tour was supposed to end at 3:00 and we got back to the hotel at 5:30.  A really great day!

There were so many things that I can't show you because the pictures were taken through the window of the van while we were moving so are blurry.  It was interesting to see the areas of Puerto Vallarta where most of the people live.  There are open air markets for shopping (the locals can't afford to shop in the tourist areas).  Most live in apartments, often with more family members living in a small suite than we can imagine.  Wages are low for most people so they can't afford more than the basics, especially if they don't speak English.  Even so, maybe because tourism is such a large industry in PV, there doesn't seem to be the abject poverty that we see in pictures of other places.

We visited a Tequila Factory which is actually a small museum to show visitors how authentic tequila is made. 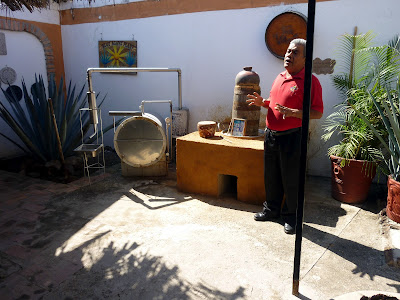 We saw the houses where Elizabeth Taylor and Richard Burton lived in downtown Vallarta (Gringo Gulch).  There is a small road between the two places over which is a wooden walkway to connect them.  Since then, the walkway has been torn down when they were estranged and rebuilt when they were together, repeatedly.

There are spectacular homes in the lush jungle vegetation on the side of the mountains above the city. 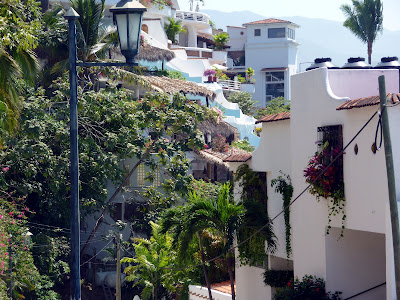 If you look closely in the center top of this picture is a condo with a pool on each terrace that flows down to the next one on each level.  (You can click on each picture if you want a bigger view.)

The road to Mismaloya offers amazing views of the bay! 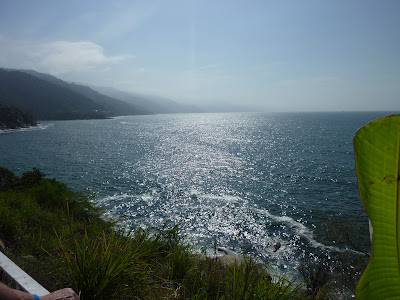 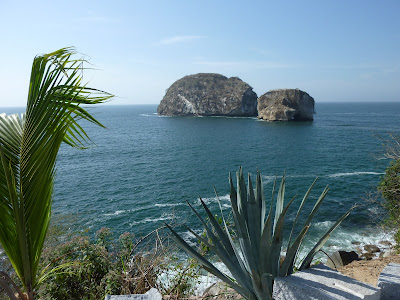 We saw what Jose described as a rare black gecko. 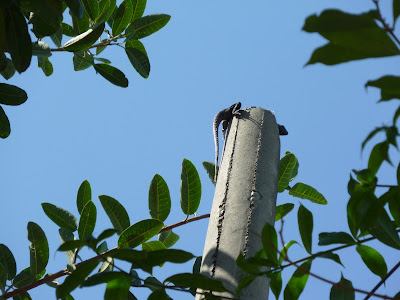 and saw another one shortly after.

There were several iguanas.  I snapped this pic as the iguana was scuttling away from me.  I guess I got too close for his comfort. 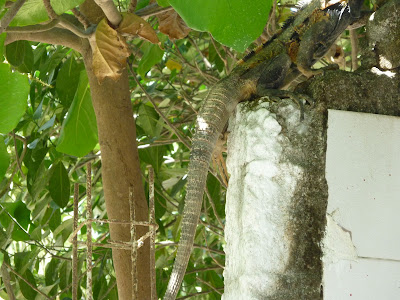 The small town of Mismaloya is not as modern as Puerto Vallarta. 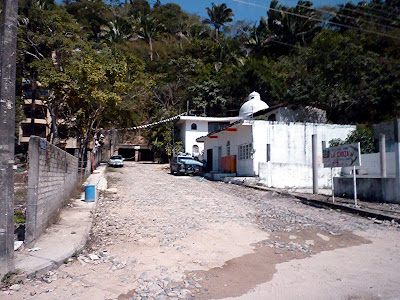 There were chickens running on the road not far from here.

We had lunch there at an open air restaurant with breathtaking views. 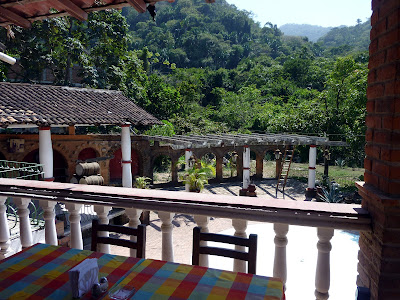 We capped off our afternoon with a side trip north of the city, along a dusty rural road.  I don't think it's included in most tours; it was one of Jose's "see it or leave it" ideas.  I'm very glad we saw it. 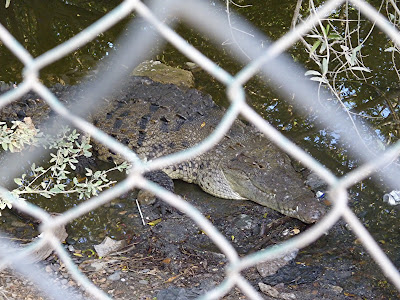 But I wouldn't want to see it any closer than this!  Along an estuary is one of few places in the world to see crocodiles in their natural habitat.  Local fishermen visit daily to throw the crocodiles the fish heads and whatnot from their catches so the crocs can frequently be seen here.  This big guy put on quite a show for us, rolling and snapping his jaws before moving on.  It was so cool!  There is barbed wire along the bottom of the chain link fence to keep the crocs away from nearby cattle.

I haven't included the downtown stops we made on the city tour because I covered those in a previous post.  We did make one downtown stop that I will always remember - a store with amazing fire opal jewelry.  I bought a modest ring while we were there (talk about an unplanned purchase) and it will bring back lovely memories of our trip and the bright colors of Mexico every time I wear it.
Posted by Susan at 8:29 PM

Such lovely views everywhere you look!
I would get nervous living around all those reptiles though :-)

Great shots. You and a few other blogs I read are really getting me in a mood to travel somewhere other than Disney World!!! I also like the fact you had a guide that would take you to where ppl actually lived. Great way to get a feel for the country you are visiting.