We received good advice from our travel agent before we went to Mexico.  She told us that the hotel maids really appreciate tips because they don't make very much money in wages.  She also buys small toys and other little treats like fancy hair bands and bath beads at the dollar store before leaving and gives them in addition to the monetary tips.  Most maids are working moms and very much appreciate these small things for their children.

I saw our maid the first day that we were in PV and, through gestures and limited language skills on both of our parts, learned that she had a ten year old boy and a five year old girl.  So each day I left her items for both of the children along with her tip.  In return she left us little origami-type treats made with towels that became more elaborate as the week progressed. 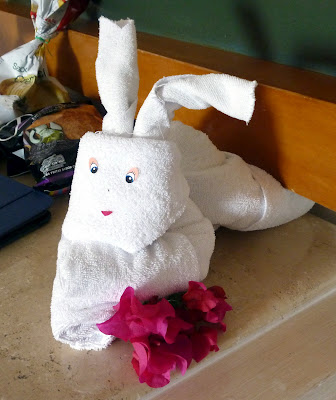 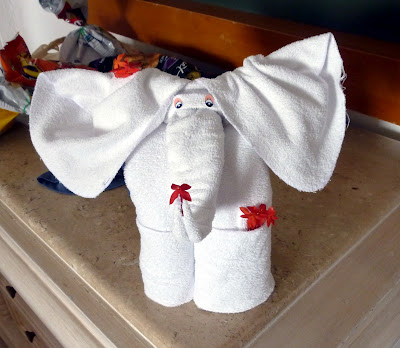 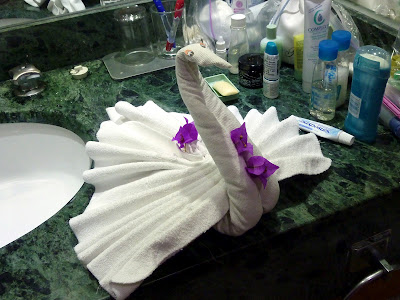 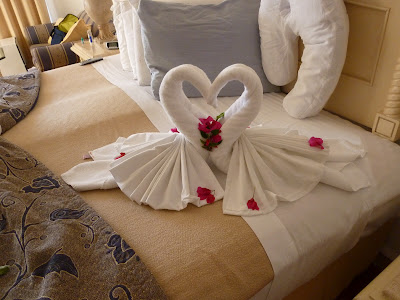 So clever and cute!

Finally, I really debated posting about a medical issue that I had from the flights but decided to do so in case other people have the same problem and don't know why.  It isn't a common problem and getting a diagnosis can be difficult.

After we arrived in Puerto Vallarta I noticed that I had a rash on my lower legs and feet.  I have a history of getting rashes when we go away* and we thought it was kind of funny at first.  The rash went away in a couple of days so I didn't think much of it.  However, after we flew home the rash reappeared on my legs and was more intense. 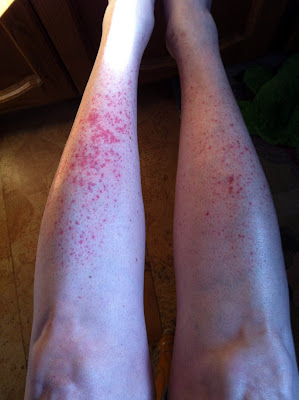 Apparently the skin on my legs and feet is thinning because of my diabetes and isn't thick enough to protect the capillaries from the air pressure changes when taking off and landing so they burst.  I also have some genetic tendency toward this because my grandmother lost both of her legs due to poor circulation and she didn't even have diabetes.  Frankly I find this news quite depressing although I'd rather find out about it now when I might still do something about it.  I am monitoring my blood sugar more closely and exercising more in the hope that I can slow down the progression of this problem.  There is one small upside to all of this - my normally hairy-as-all-get-out legs don't need shaving nearly as often as they used to.  For future flying, my doctor suggested wearing compression stockings during take off and landing and to take an aspirin to guard against the compression stockings affecting my blood circulation.  Oh, the joys of getting older.

*I developed a red, raised rash all over my body on our honeymoon.  It was a contact allergy to something that was used in the laundry of the linens in the hotel room.  My skin felt like it was on fire and it hurt to the touch so it put a bit of damper on being close to my new husband, to say the least.
Posted by Susan at 9:22 PM

Your hotel maid was very talented!
I am sensitive to the sun and can break out in rashes plus get bad headaches. I wear a hat all the time even though I am sure some people think it looks funny :-)

I was going to suggest flight socks. My granda wears them when he's on a plane.

Check with your doctor about this first, but "legs up the wall" is great for circulatory issues.

I enjoyed the towel origami in Cuba, especially since I can barely fold towels in regular fashion.

and what a talented maid!!!! LOVE all the animals. Esp the two love birs (swan). That was very nice of you to leave those little trinkets for her and her kids. Stuff like that really can make a difference.