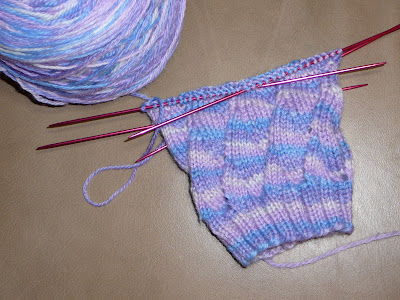 Here's the progress on the Tidal Wave sock using Fearless Fibers Wisteria. I started it with 2.0 mm dpn's and it was a little large for my liking. Luckily the Susan Bates Silvalume Sock needle set came in yesterday's mail. I really like them! They're inexpensive too. After the first two pattern repeats I switched to 1.75 mm needles so they would snug up to my ankles. The needles are 7" long and, for some reason, it doesn't bother me to knit on 5 needles instead of 4 with these. Maybe my hands aren't as worried about pushing the needles out of the stitches accidentally. 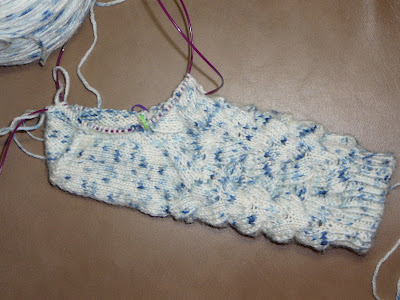 The stalled Monkey socks using Lisa Souza Delft yarn. There was a reason I put them aside and now I know it's because I'm going to rip them back and rework the heel using a heel stitch. I have skinny ankles and hate baggy socks. Actually, I put them aside to work on the Tidal Wave socks and it was just lucky that I hadn't gone any further with them before deciding to rip back. Serendipity. 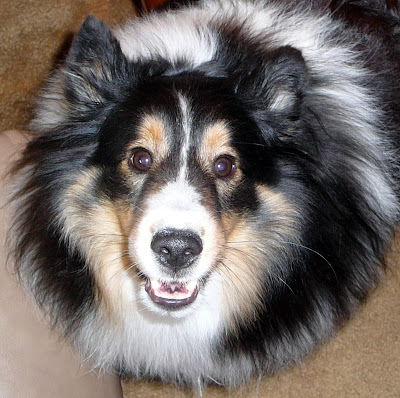 Robbie, with his eyes full of mischief as usual.

Happy first official day of Spring, everyone!
(I'm too lazy to link everything today. You'll have to go back in the posts where all of these patterns and yarns have already been linked in the not-too-distant past.)
Posted by Susan at 4:45 PM

lol....I've had lazy days like that too. I think most of us know where to go to find Fearless Fiber and Lisa Souza. :~)