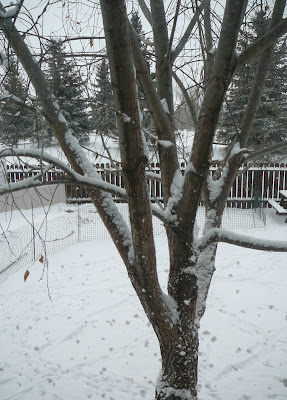 This is what greeted us yesterday morning. It wasn't the first snow of the season but it certainly was the coldest temperature we've had so far. Last night the temp dipped to -26 degrees C with a wind chill of -35C (that's about -31 F for you American folks). That's January cold!
These pics were taken from the relative shelter of the sun room. 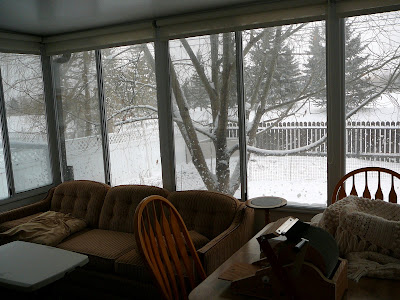 Here is what's done on the first of Dan's socks. The yarn is my own hand-dyed Knit Picks sport weight done Queen Kahuna style. It's not my favorite method of sock knitting but it can't be beat for customized fit. It's hard to tell in the pics but it's knit in a K3, P1 ribbing. 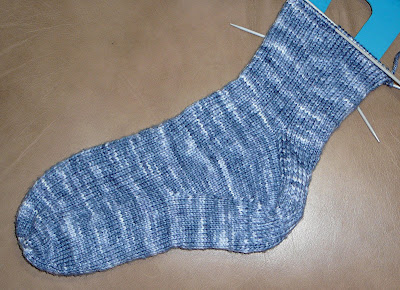 A close-up of the slipped stitch heel and heel flap. 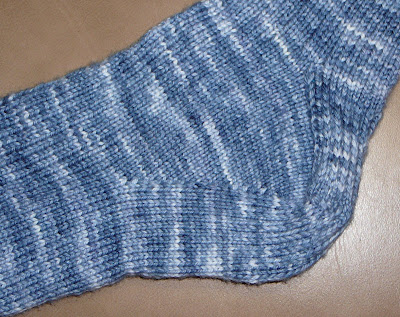 The sock blocker is way too small for these socks so here is the ribbing stretched a bit on my hand so that you can see it. The color got washed out in this photo. It's really closer to the color in the other pics. That's Robbie being nosy and a pest in the background. He's not getting as much exercise as usual because it's too freaking cold to be outside long enough so he's looking for excitement. 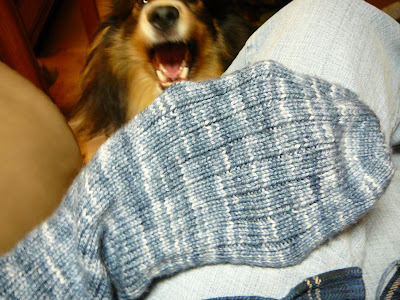 The sole of the sock. Dan has very rectangular feet compared to mine. 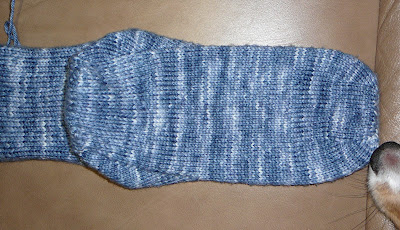 Meanwhile, this is how the Zivec dogs pass the time on a cold day. 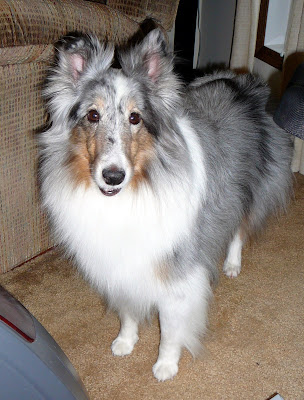 Harrison is just coming from the living room window where he keeps watch on the world. 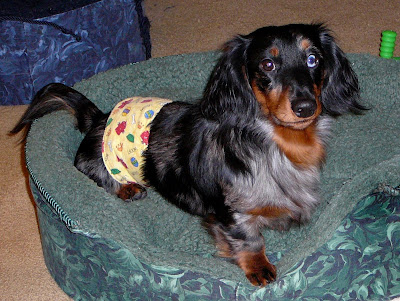 Bentley taking a break from destroying the corded edging on the dog bed. We have resorted to belly banding him as he is not an easy dog to housetrain. Apparently it's a Dachshund thing. They're too busy sniffing while outside and forget to do their business. We started belly banding Pocus too and found out that he's been merrily spritzing everywhere for most of his life. We hardly ever catch him at it and it's purely territory-marking behavior. I've never had Shelties that weren't reliably housetrained once they're mature enough. Different kind of dogs completely. If you are interested, I ordered the belly bands from this Etsy site and they are beautifully custom-made and reasonably priced. 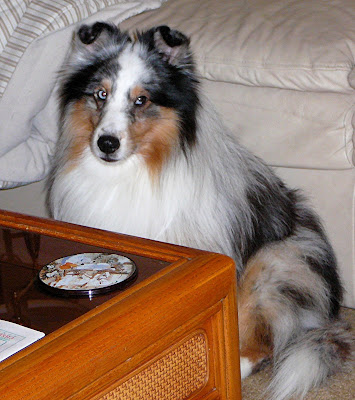 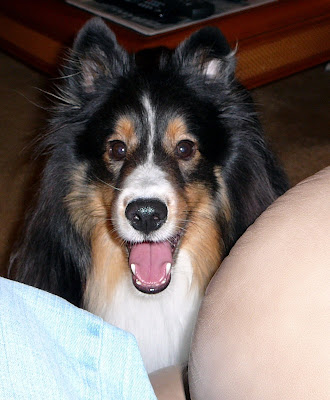 Robbie. Could this dog look any more energetic? 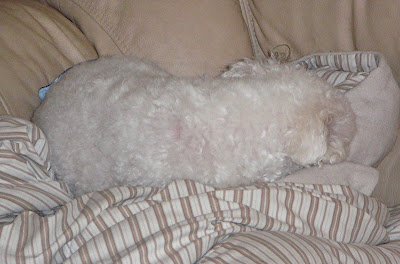 And Pocus, probably choosing his actions better than any of us, curled up in a warm sleepy ball on the couch.
Posted by Susan at 1:46 PM

My gosh, your dogs are just the cutest - I so, so love these pics! They all look so happy and relaxed - and certainly very warm, compared to the obvious coldness outside! Woah, your temperatures really dropped down terribly - we hardly ever reach such lows here and if we do, then only in January like over there as you mentioned. But this year has been a very cold and very snowy winter's start for us too - quite a nice change after the almost snowless winter last year!
Stay warm, will you? Love the socks by the way - especially the gorgeous colourway!

Lucky you to have such cute toe warmers! (I assume that once in a while the dogs curl up over your feet?) Hubby's socks are fab! They look a lot like the socks you're making for yourself, color-wise. I really love them both! Blues have always been my favorites. It's just as cold where we are - I'll never get used to it! Good thing I knit! LOL! Take care!

Burr is right thats too cold for me. I think Pocus has the right idea....curl up and sleep sounds good to me. :~)

I really like your socks--the heel looks a bit like Colin Andersson's heel only the increases are on the sole, and I like how it looks! The colorway is really pretty.

And your dogs are gorgeous! You're right, the dachshund leaking seems to be a breed thing--my friends' dachs both leak, out of exuberance rather than ill-will! They are all such pretty dogs.

Your photos make me feel a little warmer here in Germany, where it just gets down to 0 C once in a while--but having lived in New Orleans for a long time, it always seems so dark here in winter!