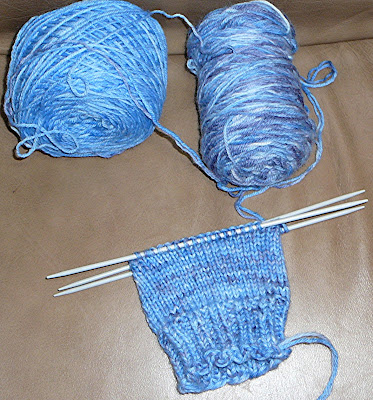 lovs2knit and monica aka gloria patre left comments about my poor frogged denim sock suggesting I dye a similar skein to knit with the original wool. That, of course, was a brilliant suggestion! I'm not sure why I hadn't thought of it myself but I am thankful that someone else was doing the thinking for me. The new skein is on the left of the picture and the original skein is on the right. I don't like it quite as well as the first sock but it's still lovely and will match my jeans.

I've been doing some Christmas knitting that I won't post just yet. Dan mentioned that he would like warm house socks so I took his measurements and then told him that it would be way too much work to knit big socks for him just to wear around the house. Now I can knit them to spec and still have them be a surprise as long as he doesn't read my blog which I'm pretty sure he doesn't. Just to be on the safe side I won't post a progress pic that might catch his eye.

Now, that was a fantastic suggestion of course - and I have to admit that I love both skeins equally! I'm totally into blue in all kinds and forms and varieties amd shades these days, and these are both particularly beautiful ones!

The sock looks great! I agree with dipsy, I like both skeins equally.