We've had a stormy couple of days around here. Yesterday was hot and muggy which usually triggers storms and, sure enough, a doozy happened at about 5:30 p.m. The rain and wind created "whiteout" conditions for a few minutes. We lost power and some streets were flooded for a while.

Here's big branch of the elm tree out front that the wind tore down. We were lucky. There was considerably more damage to other people's yards and vehicles with large trees downed by wind and lightning. 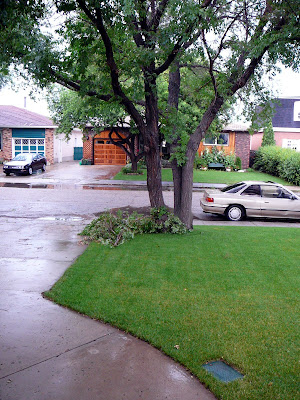 The dogs were checking out all of the willow branches that were blown down in the backyard when we ventured out after the rain stopped. 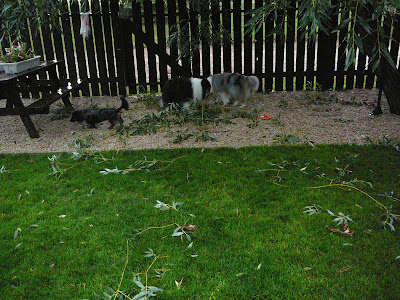 It was still very humid and another storm happened today at lunchtime. There was a good lightning show and a lot of rain. I tried to get a picture that would show you how hard it was raining but these don't really do it justice. 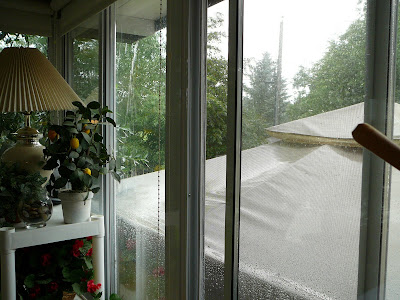 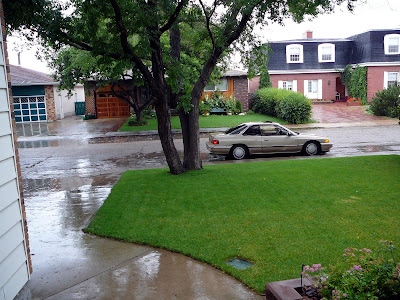 There were some funnel clouds near the city but I haven't heard of any confirmed tornadoes. Things seem calmer tonight so I hope the storms have moved on.
Posted by Susan at 9:05 PM

We had those same storms here in NY yesterday and still raining now. Lots of flooding around.

You do have a beautiful yard even with the fallen tree branches.