The Canadian National Arabian Horse Show, The Royal Red, is an annual event in Regina in August. It attracts the top Arabian horses from all across North America. A few of us dog people have made a tradition of going out for supper and then going to watch an evening of horse competition. Last night there were seven of us.

I didn't take my camera so the photos were taken by my camera and are not very good quality. I learned that using the zoom feature isn't a good idea as the pictures wind up being all blurry.

The first class in the ring were the breeding mares. They were lovely and it's fun to watch the handlers present the horses. The mares are shown on halters only so the showing is similar to handling dogs in conformation shows except that the horse people have to run a whole lot faster!

Here is the winning mare getting her picture taken with the obligatory red serge clad Mountie (if you're interesting in seeing much better pics of Mounties, check out my sister's blog). 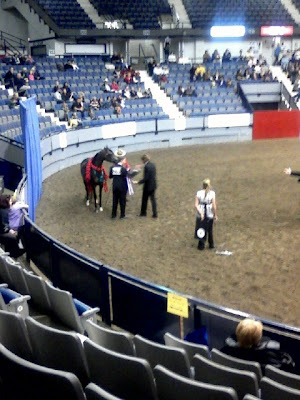 I wish that this picture had turned out better. It was taken during the Arabian Costume class which is so beautiful... 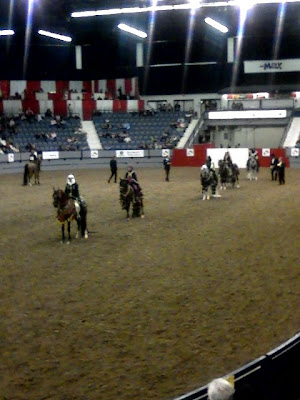 After a week of hot weather, yesterday was rainy, windy, and cool. Most locals put on a light jacket. Many of the Royal Red exhibitors are from the southern states. It appeared that they felt that winter had descended on them. Check out the pink arrows: the woman is wearing a down-filled winter coat and her pet Whippet is wearing a coat too! I don't imagine that they have ever experienced January in Saskatchewan. 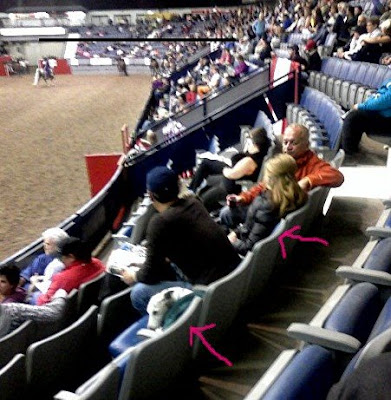 Out here Saturday was a BIG horse day too... but here it was the Traverse at the Saratoga Race Track. Guess it was a photo finish, only the 8th tine ever. I was not there. Horse races are not my thing.