taking pictures of my own hands

I hold my needles in an unorthodox way when I knit. From time to time discussions pop up on knitting lists about how our knitting styles are similar and/or different.
I have yet to see my style replicated on the internet (although Yarn Harlot is close except for the way the yarn is tensioned) but, interestingly, I have two friends who also hold the right needle like a pen, as I do. Maybe it was the style to teach it that way around here when we were kids. My mother was an avid knitter; she held the right needle with her hand over top of it and threw the yarn which is quite a common way of knitting. I remember her telling me that she didn't hold her needles right and that I should hold the needle like a pen so I taught myself based on that advice. I don't remember anyone knitting Continental style when I was a kid.
Anyway, a discussion about sock needles is happening on the Townsend Socks Yahoo group today. I have tried most of the needles out there and I love the Hiya Hiya needles best. Because of the way I hold my right needle, the join and the length of the Hiya Hiyas is most comfortable for me. I love my Addi circs for knitting larger gauge items like sweaters but they're not pointy enough for comfortable sock knitting for me. I have a lot of Knit Picks and they have great points but knitting with them for a short time makes my hand hurt where the needle joins the cable. I know that most people love them dearly and they are great needles at a great price. But I have fallen in love with the Hiyas.

As a result of all this talk I decided to try to get a photo showing you how I hold my needles. I'm the only one at home now so it took a little ingenuity.

First, I tried holding the camera with my left hand to show you what my right hand does. Worked pretty well. 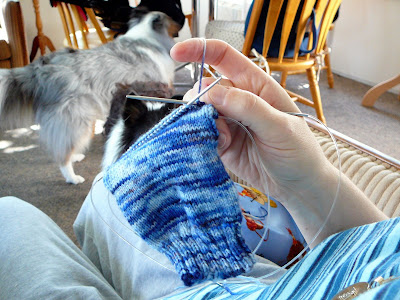 But I wanted to show you what both of my hands look like so I tried holding the camera under my chin and using the delay timer. That didn't work too well. I got several shots of the front of my shirt and few that looked like this. 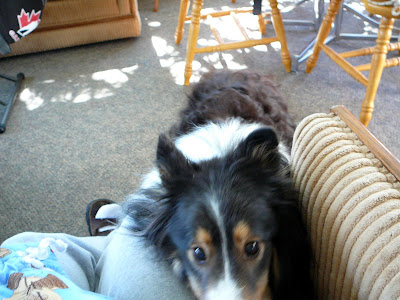 So I propped up the camera on the arm of the chair, set the delay timer, contorted my body so that my hands were somewhere in front of the lens and managed to get some very strange pics as well as these two that aren't too bad. My method allows me to knit quite quickly and alternating between knits and purls is easy. The yarn is constantly at the ready over my forefinger so a simple flick of the finger does the wrapping. It allows me to knit for a long time without my hands getting tired. 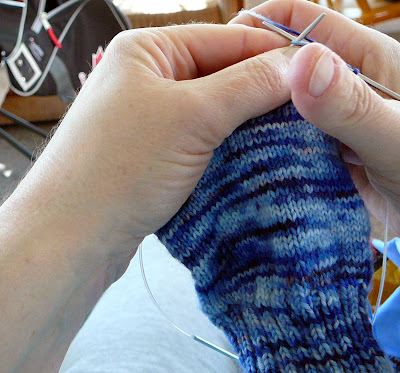 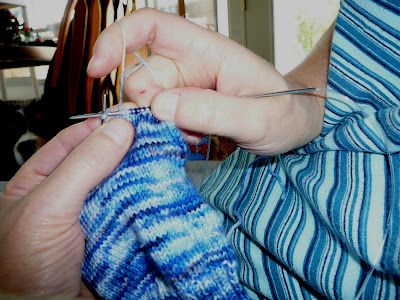 The only downside is that the rubbing of the end of the needle where the cable joins irritates my hand when I'm using most cable needles. I have a little support glove that I can put on to cover my hand at that spot but I usually can't be bothered. Also, knitting this way, I find that I want my double pointed needles to be longer than most people but getting 7" or 8" sock needles is easy.
P.S. I could probably be persuaded to part with some of my Knit Picks circular needles at destash prices. If you're interested, drop me a line.
Posted by Susan at 12:10 PM

Silly! Why didn't you get your doggie to take the pictures! ;o)

I think I hold my needles similarly, but I hold the yarn in my left hand.

I'm always in need of circs and like the KP circs. e-mail me at flwrhead at yahoo dot com. Or flwrhead on ravelry.

I don't think anyone holds needles like me, lol, I too hold my yarn in the left hand though

Hi Susan - I hold my needles as you do also! unless I am working with a large project.
Thanks for the update on Kelsey - I was wondering how she is doing. Her family are in my prayers!