it's been a busy few days

Warning to those on dial-up: picture heavy post today.
I had a very busy few days. First off, on Wednesday evening we were extremely fortunate to get tickets to one of the two shows to see Elton John in concert here in Regina. When I blogged about seeing the Rolling Stones in concert here a couple of years ago, I stated that I wasn't a good candidate to be in attendance at a rock concert. I have eaten those words with a vengeance after seeing Sir Elton! The concert was absolutely amazing and I thoroughly enjoyed every single minute of it! I would go again tomorrow if I had the chance. I've always been a fan of Elton's music and this concert certainly reinforced my admiration for him as an artist and as a person!

There was no opening act. At 8:00 sharp, the lights dimmed, the spot lights were directed to the grand piano on the stage, and Sir Elton walked onto the stage. He played solidly for 2 1/2 hours without a break. He returned to the stage in response to the thunderous ovation, signed autographs to those who were lucky enough to be near the stage, and then performed two more songs before ending the concert just shy of 3 hours. He made sure to humbly acknowledge fans in every corner of the stadium. I couldn't believe how long he performed. I can't think of any other performers of his caliber who would offer that much of himself to his audience.

We were up in the stands to the side of the stage where we had a great view of Elton and his band and the screen that showed us the close-ups the musicians, especially of Elton's hands at the keyboard. He had much more opportunity to demonstrate his skill as a pianist during the concert than we had heard on his recordings and his musical talent blew me away. The experience was somewhat surreal: I kept thinking, "Oh my, that's really Elton John in the same building as me. How awesome is that?" I never felt that way about Mick Jagger and the Stones. I guess I wasn't much of a hard rocker in my youth. Elton John was much more my speed.

One other perk was that most of the audience was about our age so there weren't any maniacs making the experience unpleasant for us. We comfortably sat through most of the concert except for the ovations. The concert was indoors and I didn't detect any scent of the marijuana wafting in the air and didn't notice anyone drunk to the point of being a public nuisance. It was great!

Our tickets stated that there would be no cameras or recording devices allowed during the concert so I didn't take my camera. Turns out I could have. Security wasn't an issue at all. So, unfortunately, all I have are crappy cell phone pics to show you.

This shows you our view of the stage before the concert started. 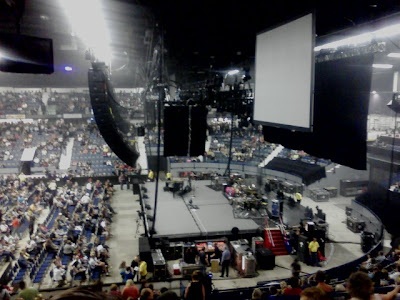 During the concert - you can see the piano keyboard on the screen. 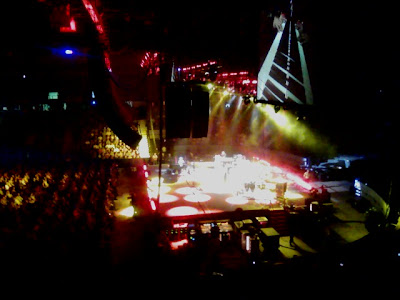 And the best pic I got of an Elton John close-up on the big screen as he performed. 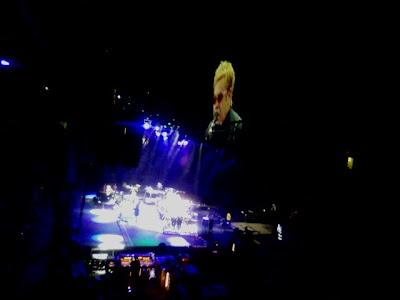 Then, as if the week wasn't already exciting enough, Bentley was entered in the dog show this weekend in Balgonie, a town close to Regina. I entered more in support of the dog club as they had not financially been able to hold the show the last couple of years and I was happy they were back. I didn't think that B had a chance to beat his campaigned sister Chloe but he surprised me by taking Best of Breed the first day. Chloe took the breed 3 times (if I remember correctly) and got a Group 4th placement in the last show today in an extremely competitive Hound Group so that was exciting!

Here Bentley and Chloe on the grooming table getting groomed for the shows. You can certainly tell that they are litter mates, can't you? 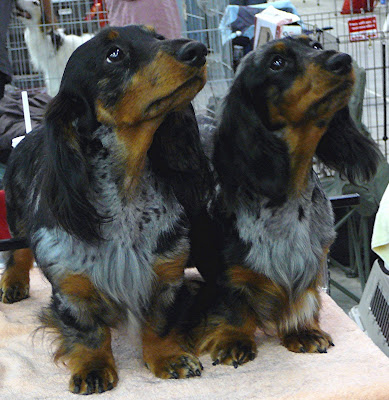 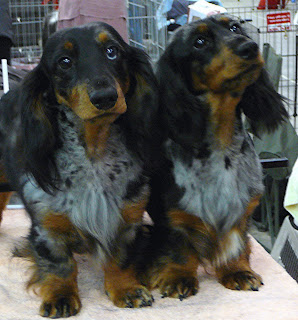 This show had an unusually large Weimaraner entry. Most people know about the breed through the photo art of Wiliam Wegman. I was trying to get some pics of this lovely puppy to share with you. Lovely puppy had no intention whatsoever in co-operating with my plan. He was moving so fast that the camera was completely missing parts of his body that were moving the most. 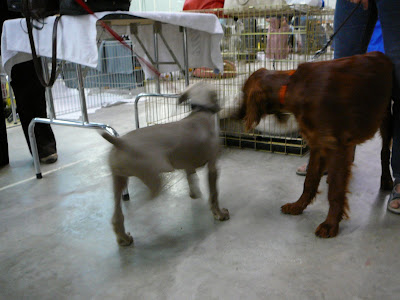 a body with a blurry head... 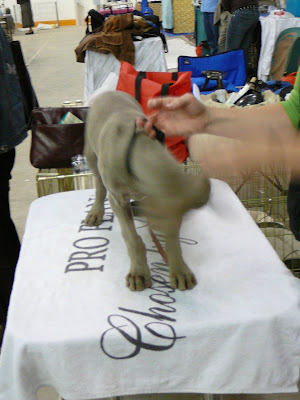 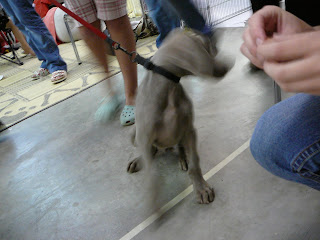 And finally, a good picture of the puppy's body with only the head a little blurry. 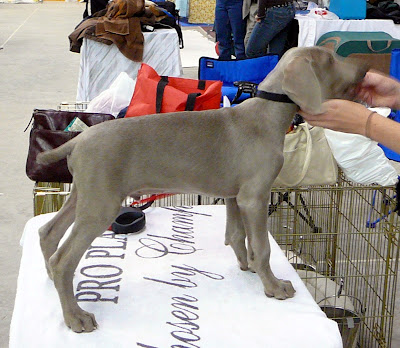 And a pretty puppy head shot. 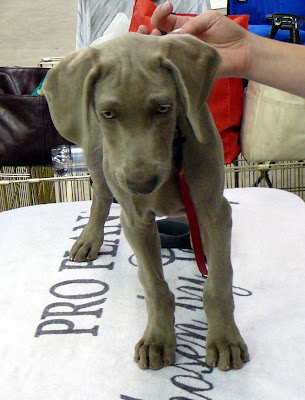 And here's something you don't see every day - a long-coated Weimaraner (sorry for the blurry shot). Not only does this dog have coat, he has a tail too! Very cool. 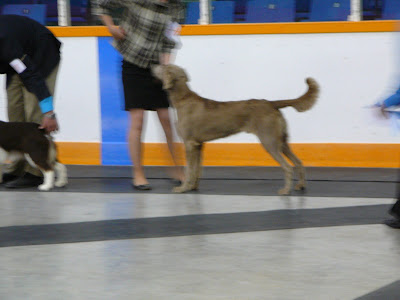 I agree about the concert and music, I'll take Elton any day over the Stones.

Those dogs are beautiful and they look identical. I'd have trouble telling them apart at all.

Your Rolling Stones blog entry was a terrific one! I related to it completely and think of many aspects of it from time to time. I know it was your RS blog that gave words to my negative feelings about rock concerts.
(And I remain very thankful for your words because my husband is a big rock concert fan and he belittles my lack of enthusiasm for the rock concert scene).
One of the many recurring insights from that blog was your frustration and anger while observing a pregnant woman power-drinking 'til she was ill, knowing that within a few years primary school teachers such as yourself would be faced with her frustration and anger as her child presented to school with a brain-based, invisible, physically handicapping condition with nasty behavioral symptoms.
Elton John just soothes our souls and makes us happy. Bless him.