why you shouldn't knit when you're recovering from pneumonia

I had started this sock (Shadow Ribs Socks from The Little Box of Socks using Socks That Rock mediumweight in colorway Stonewash) before I got sick and worked a few rows on it yesterday before I realized that something didn't look right. 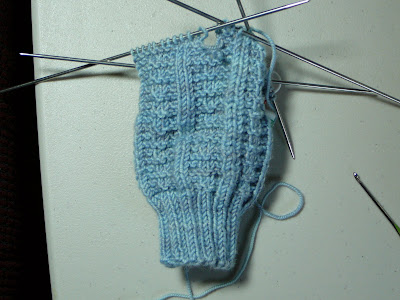 I realized that I had knit a round that should have been patterned so I patiently tinked it back. Then I noticed that while most of the sock looked fine now, there was one section that had been purled instead of ribbed. Now this is a very easy 4 row rib pattern - I had the pattern right in front of me and a counter on the knitting. Normally it would be a pretty mindless knit but I guess my brain was still addled from the whole deathly sick incident.

So, one small section of knitting to fix - it actually was only 2 stitches. No problem, knit to the section, dropped the offending stitches and prepared to pick them up properly. Couldn't do it. First I reknit the wrong row, then ended with each stitch on a different row and no thread behind it. I finally decided to give up and stick to stockinette socks until I could think better. 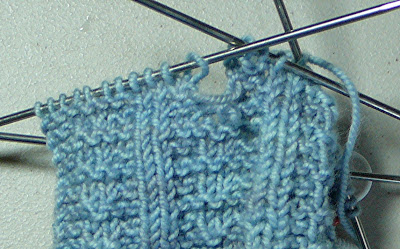 So last night I picked up the stockinette socks I had on the go in the living room. I had worked a bit on the sock on Thursday. They looked like someone had pulled out all the needles and just stuck them back into the knitting haphazardly. It would be possible that one of the dogs had pulled the needles out but I'm pretty sure that none of them have the dexterity to stick them back in, never mind that some of the needles still had the stitches on the right rows. I had started the heel flap the previous day and it was the instep stitches that were messed up so I tried to tink those stitches back to where they should be. I finally got them back on the needles, counted to make sure I had the right number of stitches, and with a sigh of relief went back to knitting the heel flap. As I did I saw that I had done one slip stitch row around the entire sock instead of just the heel flap. So I just pulled out all the needles and ripped back past that point. Jeesh!

It reminded me of a simple afghan that my grandmother had crocheted for my son. My grandmother was a very accomplished crocheter and had made heirloom quality afghans and doilies in the past. She had just had her leg amputated, was moved into a seniors' home, and was bored. She was delighted to have something to work on and just roared through that afghan. When it was done, it was hourglass shaped. The tension and stitch count varied from row to row. She made a little comment about having trouble keeping the stitch count but she didn't seem to really notice how dreadful it was and we didn't have the heart to tell her. And it still matched Geoff's room and kept him warm on chilly nights.

My advice if you're recovering from an illness: watch TV.
Posted by Susan at 3:29 PM

It's nice to see you back in action, even if the knitting is incoherent!

Great advice. I've also learned it's not wise to knit after I've been up all night with a kid and only managed to grab a 4 hour nap. Glad to here you are on the mend.