I'm feeling like I'm making headway around here.  This is the last day of our Regina Ravelry group's Challenge Week to finish WIP's and I actually have finished or made good progress on a few things.
I finished the custom spinning of Romney/Malamute.  It's likely going to be made into a knitted bag by the recipient so I spun the singles woolen but with a fairly tight twist and plyed it quite snugly too for strength.  I then aggressively finished it with hot/cold baths and lots of agitation to bring out the halo of dog fluff before hanging to dry.  The two skeins total about 140g and 415 yds. 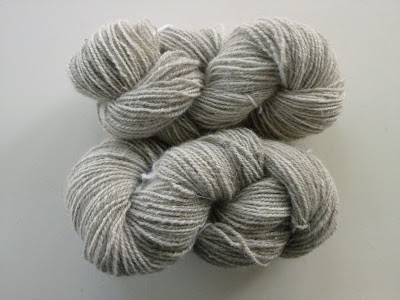 I also finished the Austin yarn. 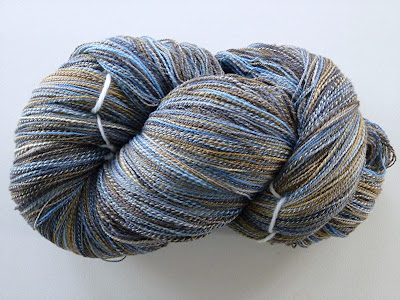 There is a whopping 1482 yds., 224g.  It seemed like I was spinning this yarn forever and the large yardage explains why.  My plan is to weave a scarf with silk as the warp and the Austin yarn as the weft to show off the fractal 2-ply.
I'm also getting the second Watermelon Sock finished more quickly than the first one.  I'm just about to start the heel. 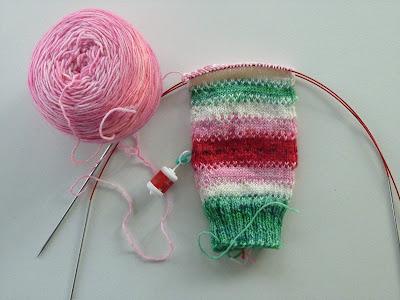 My next pressing job is also fiber related.  All the dogs really need baths before the cold weather sets in but my hand-held sprayer attachment on the laundry tub is toast and spraying fine streams of water in every direction even with duct tape covering the cracked plastic.  Dan shopped a bit the other day for a new one and couldn't find one that didn't need to be attached to a tub shower rather than the faucet.  Hopefully something will turn up soon.  I usually get pretty wet bathing dogs at the best of time.  I don't relish the notion of the sprayer dowsing me too.
My left foot had a bad summer.  I blogged about what I thought was plantar fasciitis after the Ex.  I saw my podiatrist last week and it turns out that it was actually pain because I had torn a ligament earlier in the summer.  I had been dusting the top of the fridge by standing on a kitchen chair.  When I stepped off the chair, my foot landed on a raised dog bed that someone (probably Cooper) had moved into the middle of the kitchen and rolled my foot.  I thought I heard a snap and it hurt like all get out but I was able to put a bit of weight on it by the next day so didn't panic.  It bruised in lovely technicolor shades over the next couple of weeks but healed slowly.  My activity at the Ex was too much for the newly healed foot and it protested.  So now I am doing strengthening exercises for my foot.  The moral of the story is that housework is hazardous to your health.
Speaking of summer, it still is!  We've had marvelously beautiful weather!  I covered the garden one night in September when it froze and haven't had to worry about frost since.  I'm still getting tomatoes, cucumbers, and zucchini from my garden which is unbelievable for the first of October.  I made a big pot of borscht yesterday with the garden vegetables.  With weather like this, it's hard to believe that Thanksgiving is next week.
Posted by Susan at 8:15 PM

I like the lovely shade of grey of your doggy yarn. I can't wait to see Austin worked into a scarf!!!
Outsch! That does not sound good. I hope you foot will be back to normal soon.
Yesterday, we definitely had a Fall day, with winds blowing, leaves flying all over, and it was cold. Tomorrow the pool will be closed for the season.

I love your yarns Susan! The blue one has beautiful colours.
I get a pain in my neck doing housework, so I know it can be hazardous to our health. I hope your foot gets better soon :-)

I totally agree with housework being hazardous!!!! I was cleaning the inside of a cabinet and wrecked the joints in my shoulder so badly I couldnt put on a bra! Had to have the dh do it. That lasted for 6 month! feh. see if I ever clean out another cabintet!!!! LOL