It took many tries but I finally got a couple of headshots of Robbie where he was actually standing still! Got to love the digital camera where I can erase all of the wasted shots. 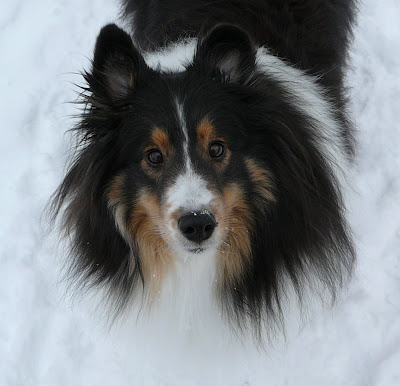 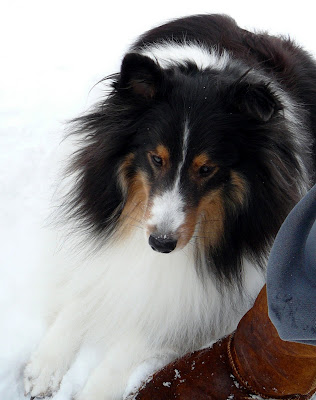 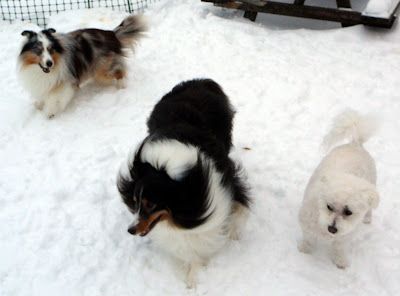 The flying sheltie shot. Look at Poke's face - "Eeeuuu! Don't run into me, you maniacs." 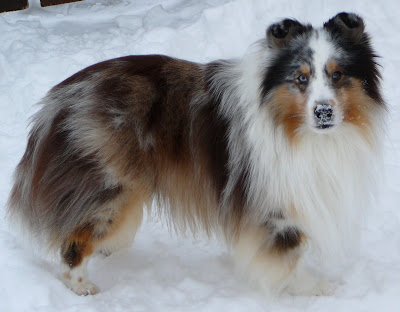 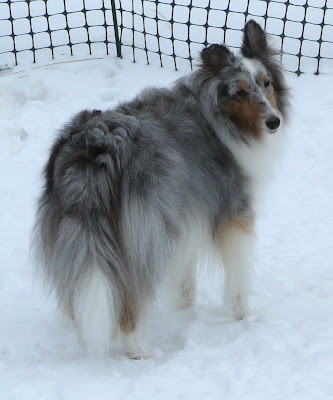 Not much knitting progress to report. I eventually got frustrated enough with the Regia yarn to cut off the knotted mass. What a waste. I won't be using that stuff for trying a new technique. It looks cool but it seems like it knots if it's exposed to oxygen. It's very loosely plied. The 2 socks on 2 circs will be tried with this Meilenweit 6-ply yarn. I think it patterns the same as the beige and gray socks that I'm using to making my sister's socks but I'm not sure. I discovered a knot in it while I was winding it and there was one in the beige and gray skein too. I hate knots in self-patterning yarn. Other than that, it's a nice sock yarn - sturdy and quite soft. 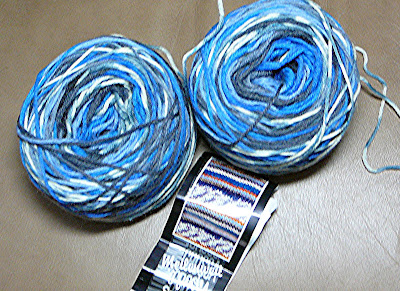 Don't forget about the blog anniversary contest! I'll be making the draw for the Lisa Souza yarn tomorrow (Sunday) evening. I'll be randomly selecting a comment from those that I received from last Tuesday until 6 pm CST Sunday.
Posted by Susan at 12:11 PM

I too, am a Sheltie lover! I've had a few over the years. They are so sweet and loving. I also have a Blue Merle, with the blue and brown eyes as well. He's 8 now and his name is Brutus. I have a Border Collie and an American Springer, but Shelties are my favourite. Brutus is so gentle with everyone. I never have to worry. Thanks for showing us the pictures! Donna

I love your dog pictures. Your dogs are beautiful! Digicams are great! Make a hundred shots, to get one fantastic one! ;o)

Maggie (my Sheltie) and I both think yours are beautiful :)) And the yarn isn't bad either. lol Love the flying Sheltie. Looks so much like ours when she races out into the snow. Then she comes back inside with a huge wad of the white stuff on top of her snout. What a clown !!! Really enjoying your blog !!! Thanks for the pictures.

By the way Susan, our Maggie is the same coloring as Robbie. Our first was a Sable and that's what I thought I wanted when we went looking for our next girl. But as soon as I laid eyes on her I fell in love.

I'm so glad I have a digital camera. I'd waste so much film trying to get a good shot of the kids or animals. They never want to work with you when you have a camera in your hands. Your dogs are gorgeous.

I love the dog photos - in the first one, it almost looks like Robbie has a lion's mane.

Your dogs are really beautiful! And seem to act as weird in the snow as ours! I have an american friend living over here, she has 4 shelties in different colours, too.
And for dog fotografy the digicams are really great!
Don't worry too much about the messy yarn, I know this and it makes me mad every time it happens...
www.myblog.de/hundgestrickt

Yarn vomit, what an apt description. You dogs are cute.

I just love your doggy pictures. Your babies are so darling! Just like you, I'm a knitting dog lover. Or is that knitting fanatic with a dog? Anyway, keep taking the pics because they are so cute!