The nice postal woman showed up with my new Schacht Ladybug wheel yesterday morning. It was a gorgeous day so I took the box out to the sunroom to set it up.

Here it is right out of the box. 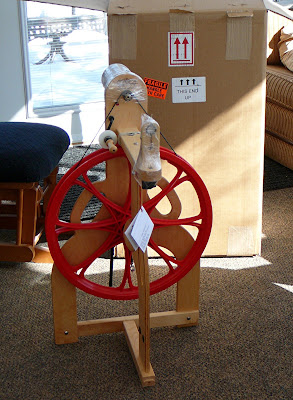 The first thing I did was look for my little ladybug. The Schacht people put them on the wheels before shipping and in any place that catches their fancy at the time. They say that no two wheels have the ladybugs in the same place. I found mine right below where the flyer fits the back maiden. 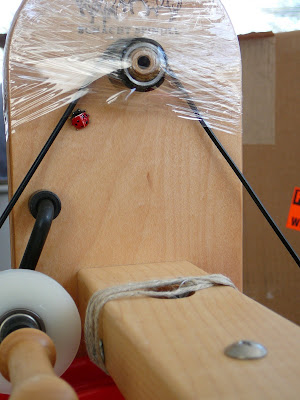 Here she is all set up and basking in the Spring sunshine before going for a test drive. She didn't need much assembly, just the treadles and the flyer. 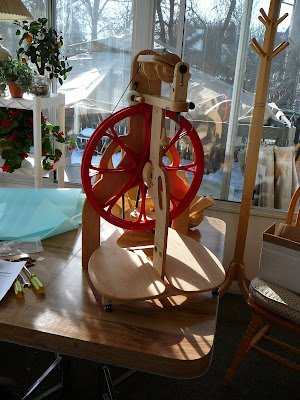 And you can still see the little ladybug peeking out from behind the whorl with the wheel set up. 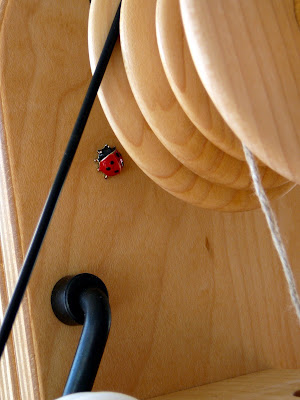 My wheel came with the on-board lazy kate which I haven't assembled yet. I'm not sure I'll like it anyway so I'm not in a hurry. There are a lot of people on the internet who don't care for it. There is also the option for double drive which I haven't set up yet either. I thought I'd play with the Scotch tension for a while first.

Dan came home just as I finished putting the wheel together and we went for our weekly grocery shopping trip so I didn't get a chance to spin on the Ladybug until later last evening. I'm impressed! She feels very solid and the treadles are nice and wide for easy treadling which is really important to me for health reasons. It's a very responsive wheel and rotates with surprising momentum for a lightweight drive wheel. I was able to comfortably sit in my Lazyboy chair and spin.

I can see why this wheel has received great reviews. It feels like a full size wheel but is easy to pick up and move around. It doesn't fold down so that limits its traveling portability but would be easy to just throw in a vehicle to take to a spinning meeting and its sturdiness would make it quite carefree to cart around. I wouldn't want to have to walk too far with it though. If I have to lug around a wheel for any distance, I'll take the Little Gem.

In my opinion, the Majacraft wheels still have some advantages over the Ladybug. I much prefer the sliding flyer clips rather than the Ladybug's hooks. Although the Ladybug comes with two whorls for four ratios, it is more of a production to change them and to remove bobbins than on the Rose with its wide range of ratios. I can see why both Schacht and Majacraft wheels have such devoted fans.

It's a little like comparing apples to oranges and, when all is said and done, they're different. I love them all. To me, the Rose and the Little Gem are beautiful while the Ladybug is cute. And then there's the Elizabeth that is so traditional and lovely. I feel fortunate to be able to own them all!

I so love that some people buy little red sports cars but you, you've got REAL style for a mid-life crisis toy!

I hope you're feeling better!

Yes you are fortunate :) I would luv a Quebec production wheel. Or a Schacht 30'saxony wheel. I luv my Rose though too.

Love the lady bug hiding on there, that's so cool

Well done you! I have often admired this wheel but can't afford an extravagance like a spare wheel! LOL!! I really liked your review of it though. I love your Rose wheel and I think if I ever came into some "mad" money I'd probably spring for one of those instead of this. I'm REALLY happy for you that you are fining it a pleasure to spin on! Hooray!