it's another.
Our furnace has been acting up for the last few weeks. We thought it was toast on Christmas Eve at about 11:30 pm but Dan managed to get it going again after several tries. We were trying to coax it along until we could call a service person today and avoid the after hours charges. It gave up the ghost late last evening. We couldn't get someone out until morning so we turned on the natural gas fireplace and fan in the living room and placed space heaters in the bedroom before going to bed. I don't like leaving those things on when we're asleep because of the fire hazard so it was pretty chilly this morning but not cold enough to cause the water pipes to freeze. (For those of you in warmer climes *coughLynncough*, frozen water pipes are very, very, very bad. Big mess, lots of $$ to repair.)

The serviceman was here bright and early this morning. It took all morning and he still didn't know for sure what was wrong with the furnace. He did know that he would have to order parts, it would cost a lot of money, and we would be without heat until next week. It was an easy decision to opt to get a new furnace instead. It will be installed tomorrow and Thursday; we should have heat by tomorrow afternoon. In the meantime we have been moving the heaters around the house and I baked bread to have the oven on. Luckily the fireplace throws a lot of heat so the house is still quite warm except in the rooms farthest away from the living room and kitchen. Poor Dan. Between the sick dog, the Christmas bustle, and now the furnace issues, he hasn't had a very relaxing holiday.

A nice distraction arrived in the mail though. 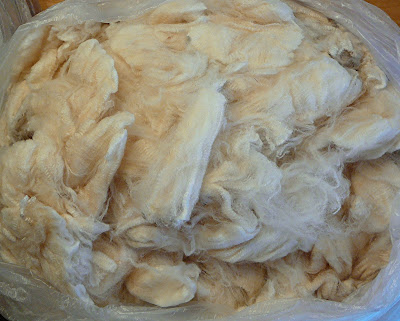 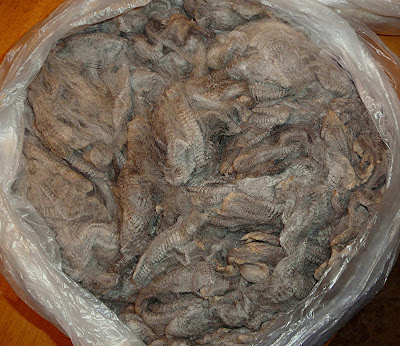 Polwarth fleeces from Rovings. The white fleece is an Elite quality yearling and the silver one is an Export quality lamb. The white one is superb; it's very clean with long locks. The silver one must not have been coated as it's very dirty compared to the white one and the lock length varies but it's a pretty color. I've already washed some of each and can't wait to start playing with them.
Posted by Susan at 5:39 PM

Ah,that's very annoying when the furnace gives out. We've had to replace it a couple of years ago. And it's always when it's the coldest.

Will be interesting to see the locks once you played with them!

OMG....you lucky duck!!
Every year for my birthday, DH gets me fleece and this year thought I'd get some Polwarth from Treenway Silks. They never replied back so I was thinking about Rovings but they cost alot more than Treenway. In the end I went for 3 colours of kid mohair. That Polwarth looks so scrumptious though....did you see the Polwarth/kid mohair blend in the new Spin Off?

LOL Well I actually *do* know that frozen pipes are bad due to my 5 year stint in NY, however I'm very happy that I don't have to worry abt such things. I just need to bring in plants when the weather gets down in the 30s.

and I guess you don't want to hear that my high tomorrow will be 78...