Well, Pocus had a very rough week adapting to the anti-seizure medication but things are improving now, thank goodness. I was prepared for his drowsiness and unco-ordination but not for the constant pacing while he was out of it. It was so upsetting that I couldn't bear to post about it until I knew how things would turn out.
On Monday evening, he started walking. Walking constantly. Walking into tight spaces and getting stuck but still moving his legs even when his legs gave out under him and splayed out from his sides. Walking night and day. He stumbled around in his crate at night, crashing into the sides and door. When I let him out of his crate, he walked into corners and got stuck or tried to walk under the bed and got stuck. When I put him up on the bed, he walked to the edges and would have walked off if I dozed off. In desperation, I phoned Jo-Ann and she said that he was having more trouble with the loading dose of the bromide than usual and to give him another seizure medication, Phenobarb, to sedate him while he adjusted to the bromide. It helped but the sedation wore off before the time that I could give him more Phenobarb. It was heartbreaking and tiring, and the busy-ness of Christmas didn't help. The only thing that kept us from considering euthanasia was Jo-Ann's assurance that things would improve. And things have.

We could tell that he was getting a bit better on Christmas Eve and things gradually improved since then. He's almost back to his old self. 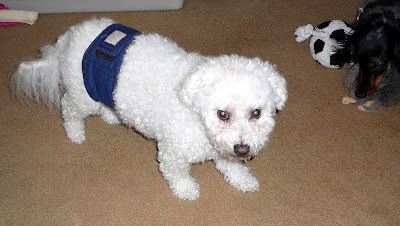 The biggest problem that we're having now is that he has decided that he should sleep on the bed at night instead of in his beloved-his-whole-life-until-now crate. It's a small price to pay for getting back our little marshmallow dog.

Christmas Eve brought us a couple of welcome surprises while we were so worried about Pocus. Bentley's breeder/grandma Daphne stopped in with a gift for him. 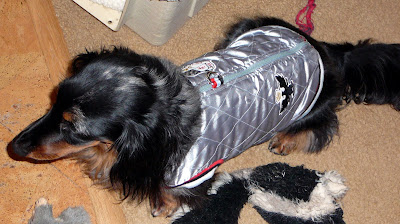 It's a silver racing jacket. His sister Chloe has a matching one. Daphne bought them because both dogs have "silver" in their registered names. 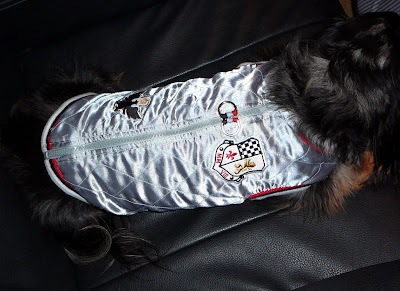 We thought that it was a NASCAR jacket but Dan decided that it is more likely to be a Formula One jacket. Not being a car race aficionado, I have no idea but it's very cute.

And later that afternoon, this came in the mail: 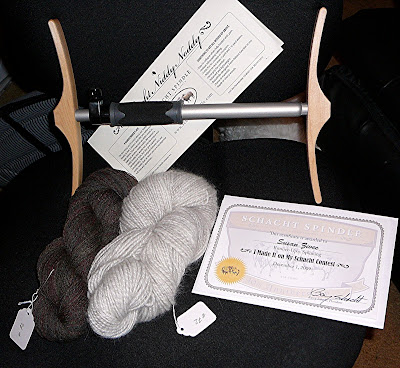 The two skeins that I entered in the Schacht Anniversary contest along with the niddy noddy prize and a certificate. There is still no answer to which skein was the winner, however. My guess is that the sheltie blend one must hold the honor.

Poor Pocus! I'm glad he's getting better. It's heartbreaking to read about it too, and of course was exhausting and upsetting for you.
The silver jacket looks racy! :o)
Congratulations again to your win! Both skeins look lovely. What are you going to knit with it?

Wow, the jacket looks great on Bentley. I'm so glad that Pocus is getting better. It had to be exhausting and scary to have him wandering all the time. Can't wait to see what you knit with your skeins.

So good to hear that your doggy is adjusting to the new meds:)
I agree that chiengora blend is the nicest yarn!!

Oh wow you have had it tough, huh. I'm glad that you knew it woudl get better, because I don't think I could watch my pooch go thru all that w/o knowing a better outcome was coming.

Congrats on the win!! and love the silver jackets!!

Wow that really sounds scary but good to read Pocus is better! The jacket is great and Bentley seems to appreciate it!