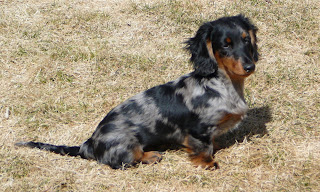 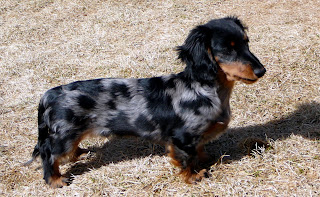 These baby pictures were taken this morning in the back yard. Isn't he handsome? 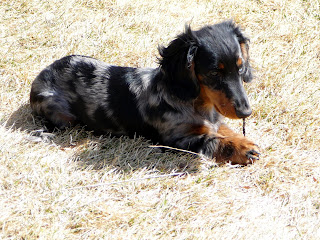 He likes to trot around with things in his mouth. In the house, it's a little duck that quacks. You can hear him coming with its quack, quack, quack, quack, "It's me and my duck. We need some loving." Bentley is the cuddliest little guy. He's happiest when he's close to me, preferably draped over some part of me or cuddled in next to me. He was on my knee when I pulled out my knitting. His little nose was soon buried into the middle of the ball of wool. He is a scenthound after all. I quietly told him no so he snuggled down into my lap. As I was knitting, I felt a little tug on the yarn and looked down to see Bentley fascinated with the movement of the strand coming from the ball. I again said no gently so he left it and snuggled in again for a nap. It will be very easy to spoil this boy. 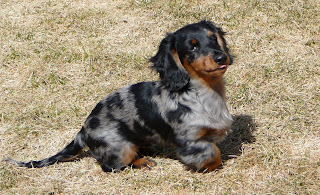 This one's just for fun. I didn't see the tongue until I was looking at the pictures on the computer. It looks like he's giving me a razzberry!
Posted by Susan at 11:13 AM

Oh Cute puppy overload. :~) It sounds like you have yourself a snuggly lap puppy.

Once again, he is just too cute for words!